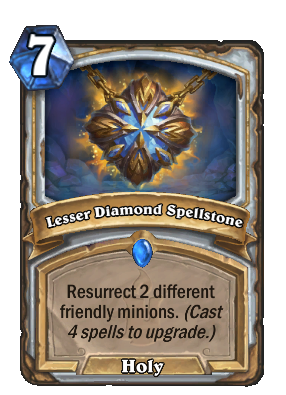 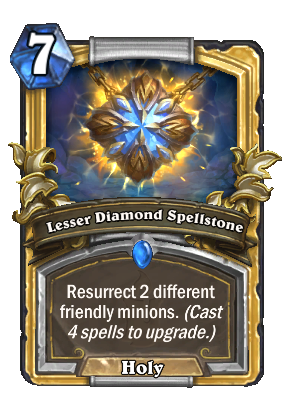 A diamond, white, this stone the eighth\nA precious jewel for those of faith\nA whispered prayer restores the lost\nBut none among them know the cost.

Lesser Diamond Spellstone is an rare priest spell card, from the Kobolds and Catacombs set.

Lesser Diamond Spellstone can be obtained through Kobolds & Catacombs card packs, or through crafting. 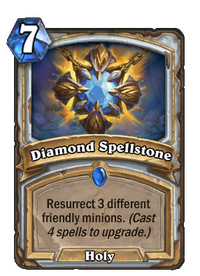 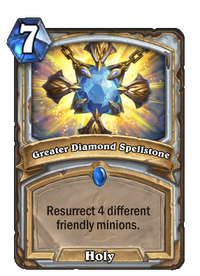 A card that is well tailored for Summoner Priest decks, as most of them run a small number of large minions and many spells to compensate, making it easier to upgrade this card as the match goes on. Shadow Visions in particular has great synergy with this card, as both itself and the Spell copy it Discovers will count towards this card's upgrading. Ideally used in the late game when most of your opponent's removal options are exhausted, and this card is likelier to be fully upgraded.

Another variant of Priest decks that capitalizes on the Spellstone is a kind of OTK or Miracle-inspired deck, which runs powerful spell-based minions such as Radiant Elemental, Lyra the Sunshard, Prophet Velen, and Malygos, letting you refill your hand rapidly through Lyra or Mind Blast your opponent to death.

In arena, this is a poor choice given the reduced likelihood of spells in your draft, and the large number of dubiously useful minions it might summon.