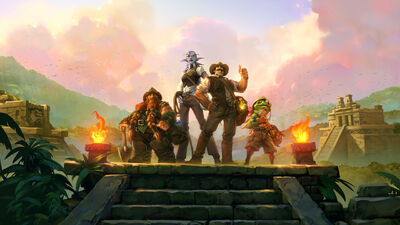 This page is about the organization. For the Adventure named after them, see The League of Explorers.

The League of Explorers is an international organization of explorers, archaeologists, and heroes. They first appeared in Hearthstone in their eponymous set, assembling the Staff of Origination and clashing with the villainous Arch-Thief Rafaam.

After successfully saving the world from Rafaam's evil scheme, the League temporarily went their separate ways. Elise became a scout leader for Junior Explorers, Sir Finley left to the deserts of Tanaris, Reno began scavenging the Dalaran crater for artifacts, and Brann took an interest in dino-taming.

While exploring the gates of Uldum, Elise stumbled across a lackey of the League of E.V.I.L.. After defeating him, she assembled the other League members from across the globe to save Uldum. After defeating the Plague Lords and Tekahn, Reno opened a portal to Dragonblight where the two Leagues faced the final confrontation.

"We are the Explorer's League, and we are in need of explorers! Adventure we seek, 'cross land and sea, won't you come and join us?"

The League of Explorers, also known as the Explorer's League, is a globe-trotting, adventure-seeking, treasure-hunting team that seeks to acquire artifacts from around the world, with the goal of preserving them in the Hall of Explorers, the greatest museum on Azeroth.[1] Home to the League of Explorers, the Hall is set deep within the dwarven city of Ironforge, and is filled with artifacts and archaeological rarities from around Azeroth, from skeletons of primordial beasts and clanking suits of armor, to dusty tomes and ancient astrolabes.

The League consists of four prominent members: its founder Brann Bronzebeard, famous explorer and younger brother of Muradin and Magni Bronzebeard; Elise Starseeker, the mysterious mastermind behind the League's operations; Sir Finley Mrrgglton, a gentleman, scholar, and murloc; and Reno Jackson, a profit-chasing treasure hunter currently on probation for bad behaviour. Recently however the League has sought help from brave adventurers to aid them in seeking the Staff of Origination.[1]

For background lore about the league in World of Warcraft and its difference in Hearthstone, see Hearthstone lore. 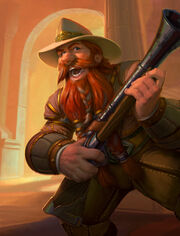 "Who knows what secrets we'll uncover?"

The youngest of the three Bronzebeard brothers, Brann is one of the greatest explorers to ever wander Azeroth.

From the frigid mountains of Northrend to the depths of Uldaman, wherever ancient mysteries call, he will follow.[2]

Founder of the League, the famous dwarven explorer Brann Bronzebeard accompanies the player in investigating the ancient halls of Uldaman.

Whether it’s frigid mountains or broiling badlands, you’ll always find Brann wherever the action is. It must be said that Brann suffers from an excess of courage, so you’ll have to stay on your toes if you want to keep up and keep Brann safe.[3]

After securing the artifact, Brann took an interest in dinotaming, travelling to Un'Goro Crater to tame the mighty King Krush.

Brann Bronzebeard is the youngest of the three Bronzebeard brothers, with King Magni Bronzebeard and Muradin Bronzebeard being his elders. Brann is an active member of the Explorers' League, following closely in the footsteps of his brother Muradin.

One of the greatest explorers to ever wander the lands of Azeroth, Brann is recognized and welcomed across the known world. The warm, courageous dwarf has made friends and acquaintances in nearly every charted land - and presumably those uncharted as well. Brann has spent many years mapping out the remote corners and hidden nooks of the Eastern Kingdoms for his beloved Explorers' Guild, which he helped to found. With the discovery of Kalimdor, Brann was one of the first dwarves to tread the unknown paths of the ancients. He has a monkey pet named Glibb. 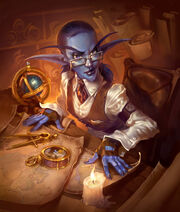 She's got a lead on the long-lost Staff of Origination - and she needs your help to find it![2]

"Elise has been on hundreds of League expeditions, she's created a huge catalog of maps and charts, she loves navigation and cartography, but her biggest joy is locating ancient artifacts, that are so old that they are just whispered about in taverns."[1]

The night elf Elise Starseeker is original to Hearthstone. Originally a teacher for night elven druids, Elise began cartography for the League at an unknown time. After recovering the Staff of Origination, Elise took a more direct approach to exploration, learning that "blazing her own trail is a lot more fun than following someone else's map" from Reno. 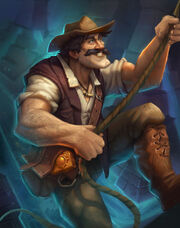 World-renowned archaeologist, explorer, and treasure hunter... or so he says.

His membership in the League of Explorers is currently on probation. Just make sure that all artifacts you collect with Reno are properly accounted for upon your return.[2]

The impulsive treasure hunter Reno Jackson has already cleared most of the traps from the Temple of Orsis... or so he says.[1]

Reno is quite the dashing adventurer, as he’s sure to inform you, but sometimes he gets a little confused about the difference between treasure hunter and archeologist. While his fingers can be a little sticky, Reno’s heart is in the right place. He’s out to prove that he deserves his place in the League of Explorers, with a little help from you.[4]

Reno is original to Hearthstone. After scavenging The Gatling Wand from the Dalaran crater, Reno self-styled himself as a "Relicologist" and made an effort to learn arcane magic. While unpredictable, Reno has proven himself to be an effective mage in the right situations. 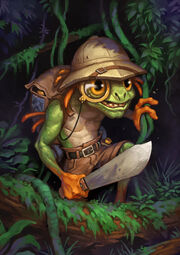 A sophisticated gentleman and an accomplished scholar. Also happens to be a murloc.

How Elise found him as an egg, his joining the League of Explorers, and his eventual knighthood... these are stories for another time![2]

Sir Finley Mrrgglton has spent the last few months stationed in Stranglethorn Vale, studying the local gorillas and attempting to infiltrate their culture.[1] As such, he is the perfect candidate to journey with the player to the previously lost Ruined City, deep within the jungle.

Sir Finley Mrrgglton is a sophisticated gentleman, a valiant explorer, and an accomplished scholar—he even has a knighthood! He also just happens to be a murloc. Sir Finley is confident that his diplomatic and linguistic skills will allow him to negotiate with the jungle’s residents and retrieve the Pearl post-haste! Do hurry and check up on him though, will you? It’s quite likely that the natives are rather more restless than Sir Finley has anticipated.[5]

Sir Finley is original to Hearthstone. His upright posture in comparison to other murlocs, as well as his distinguished demeanor, appears to be a result from hatching and growing up within the League of Explorers. He has since appeared in World of Warcraft with the Legion expansion, where players can embark on a quest line with him in Stormheim on the Broken Isles.

After defeating Rafaam, Finley left on a trip to Tanaris where he befriended a beetle he named Maxwell. However, he was buried by an unexpected sandstorm and saved by Elise. While exploring the tombs beneath Uldum, he decided to wield the Scales of Justice, a powerful fish-shaped mace.