This article is using {{Card template}}.
See Help:Style guide/Card for how to edit this kind of article.
Edit this article
Lay on Hands
594 • EX1_354
Regular 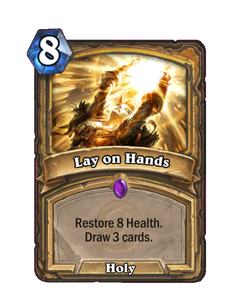 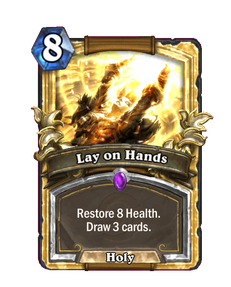 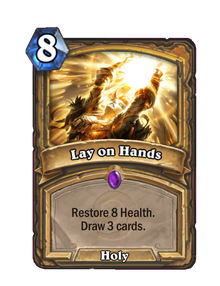 Lay on Hands is an epic paladin spell card, inducted into the Legacy set, formerly from the Classic set. 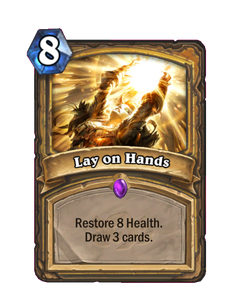 Lay on Hands is a late-game oriented card. In most scenarios, it should be used after taking big damage from a player. This card is highly valued by some, not only for its game sustain, but for its draw power as well. Unfortunately this can often only prolong a lost game, but it is a great top deck for tricky situations.

The big healing effect can save some strong minions like Zandalari Templar.

When paired with Prismatic Lens, it can give you a good step away, and will get even stronger if combined with Blackguard, as it will probably give you a hit kill strike.

You can always contour the high cost with Holy Wrath, specially if paired with Spell Damage, as it will probably nuke your opponent or destroy almost every minion. But be aware that this card is not so strong if you rely on its effect.

Lay on Hands is a paladin ability from World of Warcraft that heals the target for an amount equal to the casting paladin's health. One of the paladin's most infamous abilities, it is frequently used to save a target (often the paladin himself) from imminent death, effectively restarting the fight from full health. It has often been criticised for its power, largely by players not familiar with the other weaknesses of the paladin class, due to its ability to allow the paladin to apparently cheat death.

Both spells are based on the 'laying on of hands', a real-world ritual found in many faiths, which can take many different forms.