This article is using {{Card template}}.
See Help:Style guide/Card for how to edit this kind of article.
Edit this article
Lava Shock
2289 • BRM_011
Regular 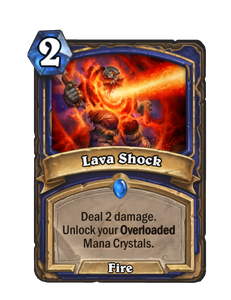 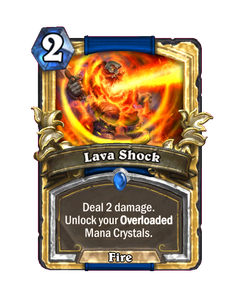 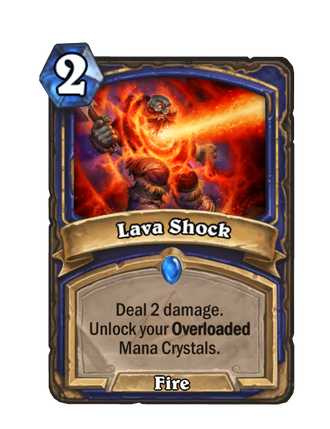 Lava Shock is a rare shaman spell card, from the Blackrock Mountain set.

Lava Shock is most effective when combined with multiple cards with Overload. For a list, see Overload.

Crackle, followed the next turn by

The Coin; or with 4 Overload, to pre-nerf

The Overload-countering effect of Lava Shock can also be effective strategically, such as in combination with

Neptulon. Neptulon's Overload is designed to prevent the player from making the most of the Murloc minions granted by its Battlecry. Lava Shock can allow the player to overcome this restriction, and take advantage of the new cards with a full 10 mana the next turn, providing a significant tempo advantage. This card can also be used in decks based around

While there is no World of Warcraft spell named Lava Shock, shamans have access to a range of 'shocks', including

Earth Shock, which have already been added to Hearthstone.

Lava Shock does feature minorly as an NPC ability in Warlords of Draenor, appropriately found during the Operator Thogar fight in Blackrock Foundry. However, this Lava Shock is wielded by Blackrock orcs, potentially against the Dark Iron dwarves, as shown on the Hearthstone card's art.

Coren Direbrew, make sure you stroll steadily along the stone paths that connect the city. Those paths are all that separate you from a dip in a molten volcanic river! Shamans can harness the essence of lava in order to melt away their Overload problems. How refreshing![5]