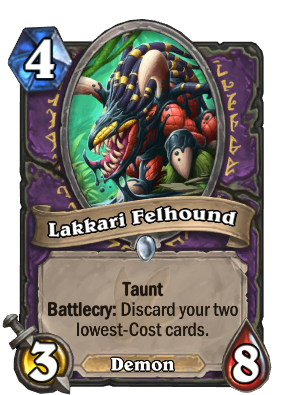 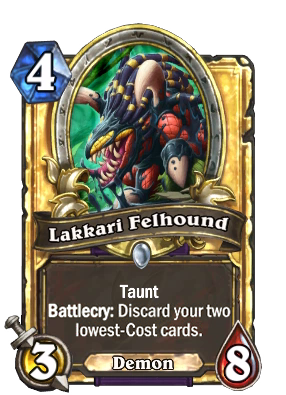 Guaranteed to track tar all over your carpet.

Lakkari Felhound is a common warlock minion card, from the Journey to Un'Goro set. 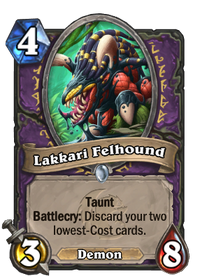 Lakkari Felhound can be obtained through Journey to Un'Goro card packs, or through crafting.

As an Ancient of Blossoms that costs 2 less, this is a very powerful Taunt in Arena. Playing this will generate a tremendous amount of tempo as long as it doesn't get answered immediately, making this a high-risk, but very high-reward card. It's more suitable for an Arena deck with a lower mana curve so the player can empty their hand in the mid- or late game without discarding any cards.

In a constructed environment, while it's much more riskier to play compared to alternatives like Doomguard, it is a strong enabler for discard synergy effects like Clutchmother Zavas and speeds up quest completion for Lakkari Sacrifice. Krul the Unshackled also lets you drop this minion into play without having to pay its steep summoning cost, and Kabal Trafficker can add additional copies to your hand.

This felhound drips with the thick tar of the Lakkari Tar Pits. Given the power of the elementals controlling the pits, this may reflect an influence over or even outright control of the demon by the tar pits' rulers.

Felhounds (also known as fel hounds, felbeasts, hellhounds, manastalkers, and felstalkers) are ugly, red, spined creatures from the depths of the Twisting Nether. Felhounds are demon hounds used by the Pit Lords to sniff out sources of magic wherever they be found. Felhounds, who feed upon magic itself, are fond of draining the energies of hapless wizards and then ripping their bodies to shreds. They serve as the forerunners of the Burning Legion.

The Lakkari Tar Pits are, as the name implies, tar pits found in northern Un'Goro Crater, just below Marshal's Refuge. Flowers, Tarblossoms grow at the bottom of these pits, which have gone unnoticed for a long time. Tar beasts live in the area among several giant bones of creatures that got stuck here.