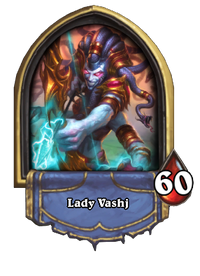 If her hair-snakes give you the weeblies, wait 'til you see her Shock Blast.

Lady Vashj is a boss encounter found in the Trial by Felfire challenges. It is the second boss of The Slithery and the Surly and the seventh boss of the challenges. 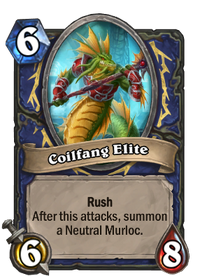 We are the Highborne, and the time has come at last for us to retake our rightful place in the world!

I did not wish to lower myself by engaging your kind, but you leave me little choice...
Lord Illidan! Why have you turned against me? (vs. Illidan Stormrage)

Did you not hear me? I am Highborne. Begone.

Leave none standing!
In Azshara's name!
You may want to take cover.
Your time ends now!

We alone shall control the water in Outland, surface filth!
I conquered Outland. What have you accomplished?
No, you may not feed my hair…

Straight to the heart!

Death to the outsiders!
Destroy them, my Coilfang!

Is that my reflection in the water? I look... wonderful!