This article is using {{Card template}}.
See Help:Style guide/Card for how to edit this kind of article.
Edit this article
Lady Liadrin
57476 • BT_334
Regular 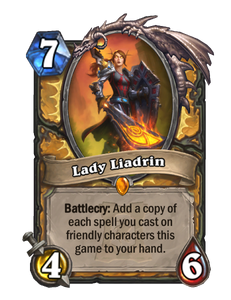 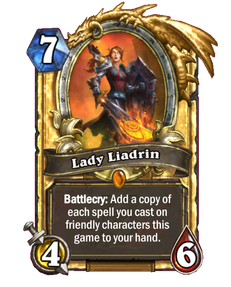 Dimensions: Full • 330 x 410px
Elite
Battlecry: Add a copy of each spell you cast on friendly characters this game to your hand.
Flavor text

When it comes to spells, she loves 'em then she librams. 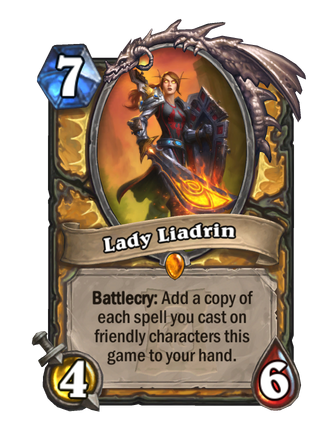 For the alternate hero, see

Lady Liadrin is a legendary paladin minion card, from the Ashes of Outland set.

Liadrin is meant for paladin decks that have a lot of buff cards. Similar in ways to

Lynessa Sunsorrow, but instead of casting all the buffs on a single minion, Liadrin allows the player the freedom of choosing where they want the buffs to go, at the cost of mana and hand-size. Giving the player more copies of

Blessing of Kings gives this minion decent value for her cost, but the lack of taunt means playing her may be on the slow side.

Where Lady Liadrin really shines is with the Libram cards. Paired with

Aldor Attendant, you should be able to ideally play most of the librams you gain from Liadrin the turn you play her. However, if one has already played

Libram of Wisdom more than 5 times before Liadrin is played, one must be wary of hand-size issues to avoid overdrawing.

Pen Flinger and Librams of Wisdom, practically creating a board clear with

Libram of Justice added in the mix.

Liadrin's effect is not limited to Paladin's spells. She can recover

Bananas, and spells obtained by

This card depicts Lady Liadrin as she appears during the events of Battle for Azeroth.

Lady Liadrin (pronounced /liːɑːdrin/, "lee-AH-drihn") is the matriarch of the Blood Knights, Silvermoon's order of blood elf paladins. Once a high priestess of the Light, Liadrin became disillusioned with her faith after the Scourge invasion of Quel'Thalas, and spent the following years honing her martial prowess against the undead occupying the Ghostlands. When M'uru was shipped to Silvermoon by Prince

Kael'thas Sunstrider, Liadrin was summoned by Grand Magister Rommath to partake in a radical idea the magi had devised: the empowerment of Light-wielding warriors by siphoning the captive naaru's holy energies.