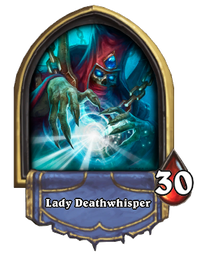 Lady Deathwhisper is a boss found in the Knights of the Frozen Throne mission. She is the third and final boss of the mission's Lower Citadel wing. 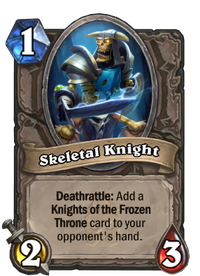 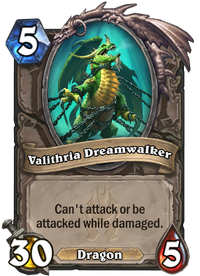 At the start of the fight, you will have Valithria Dreamwalker on your side of the board, but damaged to just 1 health. Her high attack enables a quick win if you can find a way to enable her to attack - which means either healing her to full health, or using a silence effect, or lowering her maximum health to match the current health (e.g. through Equality). Each of these strategies has some specific drawbacks and benefits.

The downside of healing is that you have to heal her back every turn, because Lady Deathwhisper's hero power will automatically damage her back to 1 health at the start of her turn. The benefit is that her hero power makes Deathwhisper's minions unable to attack Valithria, so she is very likely to survive. Additionally, you can safely use Valithria to clear out a low-attack Taunt without losing her.

The benefit of using a silence is that you can now attack with Valithria on every turn, without requiring additional effort. However, this also means that Lady Deathwhisper's minions can attack her at will, so you will need to put in more effort to keep Valithria alive. If you can clear the board you should be safe, because Deathwhisper's deck contains no minions that have Charge. (However, if you are really unlucky you could lose the game due to Forbidden Shaping generating such a minion with).

Setting Valithria's maximum health to 1 is in many ways similar to silencing her, however you have one additional drawback - the lowered maximum health itself. With a silenced Valithria, you still have the option of healing her and then using her to remove a low-attack minion from the board; once her maximum health is at 1 you lose that option, making her even more vulnerable to Deathwhisper's minions.

Divine Shield is very effective for keeping your minions on the board as well as keeping Valithria protected if you are using the "set Health to 1" strategy.

Lady Deathwhisper seems to prioritize removing the threat of Valithria over attacking your hero; that makes survival in this fight a bit easier than in some other boss fights.

A Priest deck built around Baku the Mooneater can be very potent, as Priest's upgraded hero power can fully heal Valithria every turn from turn 2 onwards. This can result in a kill as early as turn 5 if Deathwhisper does not play any Taunts.

Combining Platebreaker and Circle of Healing on turn five can provide you with an easy OTK, providing that Deathwhisper doesn't have any taunt creatures on the board.

Argent Braggart can be used to instantly gain a 30 attack minion that can attack at any time, although it will most likely need additional protection.

As the third and final boss of Lower Icecrown Citadel, defeating Lady Deathwhisper unlocks the Upper Reaches and awards the player with a Knights of the Frozen Throne card pack.

The Lich King
This is Lady Deathwhisper. Before she got nerfed!

Lady Deathwhisper
What is this disturbance? My work here is not complete.

Valithria Dreamwalker
Help me, champion! I must not... give in.
The Lich King
Deathwhisper! I told you to finish off that dragon. For the leader of a death cult you’re taking your sweet time.

Lady Deathwhisper
Was that a threat?

Lady Deathwhisper
Darkness embraces you...
Death calls to you...
Do you grasp the futility of your actions?
The living are so very weak...
Your flesh is a curse...

That is not the good idea you think it is.

Ah! You, too, have tasted the master's power...

Master I – please – I'm killing them as fast as I can!

Valithria Dreamwalker
I am... renewed!

Lady Deathwhisper
Argh..
The Lich King
That dragon will undo all we’ve wrought! Destroy it, Deathwhisper!

The Lich King
Stop toying with them and finish this, Deathwhisper. Why isn’t Arcane Explosion in your deck!?

Lady Deathwhisper
Impossible....!
The Lich King
Your deck has failed me, Deathwhisper. Be content that your defeat was quick.

The Lich King
Once more. With healing!

The Lich King
You seek to turn my power against me? Hold fast while I net-deck something that will forever shroud this world in darkness.

The lich Lady Deathwhisper is the Supreme Overseer of the Cult of the Damned and the second boss of the Icecrown Citadel raid. The fight is mostly a DPS race (with a high damage output it becomes significantly easier), but also requires high awareness from all raid members. The 25-player Heroic version of this boss is one of the most difficult encounters in the instance.

Valithria Dreamwalker is a Green Dragon captured by the Scourge to use as a test subject and imprisoned within Frostwing Halls, serving as the first boss of that wing. The goal of the fight is to heal Valithria up to 100%, while adds spawn in decreasing intervals in a chaotic battle for survival. The loss of a tank or a healer could easily result in a wipe.

The connection between Lady Deathwhisper and Valithria is unique to Hearthstone; the two are independent boss battles in World of Warcraft.