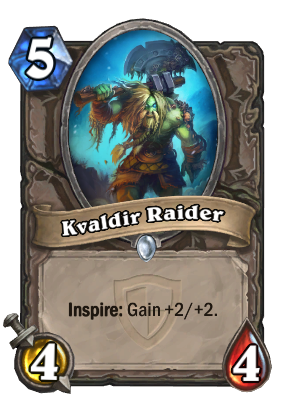 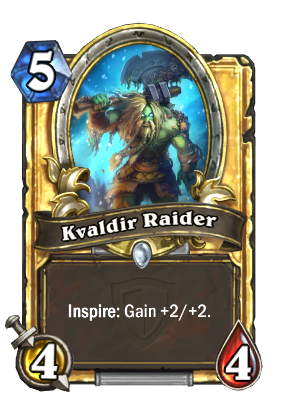 Coming soon... to a tuskarr village near you!

Kvaldir Raider is a common neutral minion card, from the Grand Tournament set.

Kvaldir Raider can be obtained through The Grand Tournament card packs, or through crafting.

It is wise to use this card in synergy with minions that make the Inspire mechanic easier to trigger, like Maiden of the Lake, Garrison Commander or Coldarra Drake. Its effect can also be useful with Hero Power boosting cards, such as Fallen Hero and Justicar Trueheart, to get added value out of your Hero Power while buffing Kvaldir Raider.

If the player uses a Mukla's Champion and activates both effects, this card's power will be greatly boosted, although the chance is unlikely given the mana cost of both cards unless mana cost alteration strategy is applied. Use of Emperor Thaurissan or Fencing Coach would allow you to play both minions and the Hero Power for two powerful minions that your opponent must deal with.

The kvaldir, or tuk-hariq (meaning "walkers of the fog" or "sons of the mist" in the tuskarr language), also known as sea vrykul, are fearsome seafaring vrykul raiders who roam the seas raiding ships and coastal settlements.

Long ago, tribes of vrykul were scattered across ancient northern Kalimdor. One tribe in particular struggled against a terrible malaise that ravaged its people.

Combating this affliction, this "curse of flesh," all but consumed the tribe. After exhausting all natural attempts, the tribe sought the aid of its priestesses. These women plumbed the world of spirits for answers, but they found only a malevolent entity lying in wait.

Their ritual went horribly wrong, as the entity further corrupted those that sought freedom from their curse. These eternally vengeful beings would later be called the kvaldir.