This article is using {{Card template}}.
See Help:Style guide/Card for how to edit this kind of article.
Edit this article
Kun the Forgotten King
40416 • CFM_308
Regular 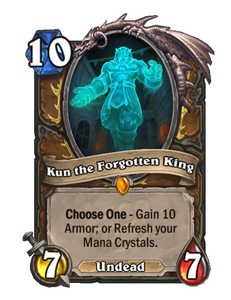 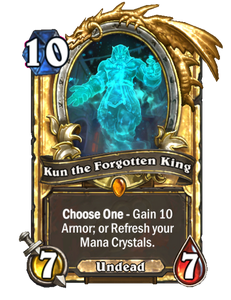 Aya siphons a bit of Kun's soul to animate each golem in her Jade army. To his credit, he's being a great sport about it. 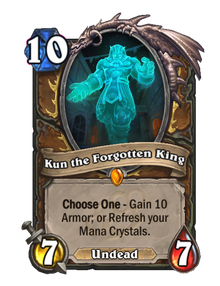 For the event version of this card, see Kun the Forgotten King (Event).

Kun the Forgotten King is a legendary druid minion card, from the Mean Streets of Gadgetzan set. 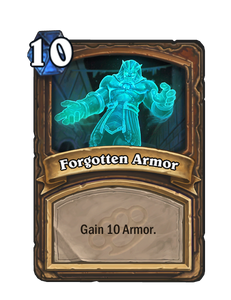 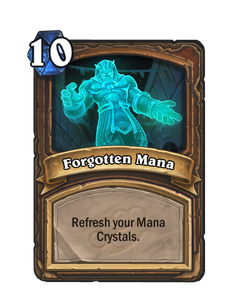 Forms a most devastating combination with Aviana. Kun and Aviana serve as the base for many combo decks, including but not limited to Malygos, King Togwaggle, and Star Aligner.

Otherwise it can still function as a free 7/7 minion which requires 10 mana to play, and in more troublesome situations it can provide 10 armor, which can be essential later in the game. It's significantly more valuable if you also have Ossirian Tear from Untapped Potential.

"Crucially, young Aya has the unique ability to create Jade Golems, and she is the source of the trinkets that so many of us carry. How she came by this incredible power is a mystery, though I swear I have seen her communing with the spirit of a Mogu king I could not name. Such a being must be most ancient indeed."[2]

Kun the Forgotten King is unique to Hearthstone. He is a mogu, a race of powerful and cruel beings that once ruled over the land of Pandaria. Given his title, he may have been a former ruler of the mogu empire or one or several of the pre- or post-empire mogu clans.

The mogu are a powerful magical race who live in Pandaria. Proud, hateful, and powerful both physically and magically, the mogu are the foremost enemies of the pandaren. The mogu and pandaren have fought over the future of Pandaria since time immemorial.

Though created by the Titans during the creation of Azeroth to serve and protect the land, they were later afflicted by the Curse of Flesh, eventually losing their way and valuing power and control above all else. Under the reign of emperors like Lei Shen, the Mogu Empire dominated Pandaria. After the Pandaren revolution and the downfall of the empire, the mogu clans scattered.

Following the arrival of the Alliance and the Horde, the mogu clans made various attacks to reclaim their former glory from the pandaren in the ensuring chaos. Shan Bu and Zhao-Jin the Bloodletter in particular led their clans against the pandaren-controlled Vale of Eternal Blossoms and Townlong Steppes. After the fall of the newly resurrected Thunder King, the mogu have once again been defeated.

Additionally, Kun bears a striking resemblance to Norushen, a titanic construct with connections to the mogu who was entrusted with safeguarding the heart of the deceased Old God Y'Shaarj.

From the World of Warcraft Adventure Guide:

Some say that the mogu race was created in the image of this titanic construct, left deep beneath Pandaria to watch over and guard the continent's darkest and most dangerous secret.