This article is using {{Card template}}.
See Help:Style guide/Card for how to edit this kind of article.
Edit this article
Krul the Unshackled
40537 • CFM_750
Regular 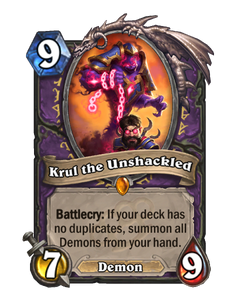 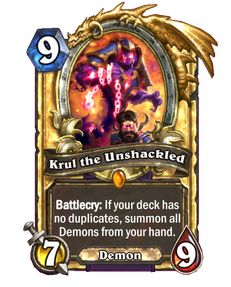 Dimensions: Full • 330 x 410px
Elite
Battlecry: If your deck has no duplicates, summon all  Demons from your hand.
Flavor text

Spicklefizz pondered his life choices as he looked at the chain around his neck. "Become a warlock," they said. "You get to enslave demons," they said. 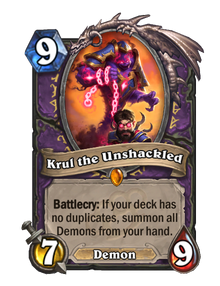 Krul the Unshackled is a legendary warlock minion card, from the Mean Streets of Gadgetzan set.

This card's effect, while has the potential to be extremely powerful, is also difficult to use. Players need to account for not just having to build a deck around this card's effect in the first place, but also need to consider their demons at hand when playing Krul.

Since this card puts all demons from hand to the battlefield directly, it does not trigger the Battlecry effects of the demons summoned. This is good since many demons like Pit Lord and Doomguard have a negative effect on their Battlecry effects, there are a few exceptions, such as Abyssal Enforcer and Lord Jaraxxus. Whether to save Krul until you can play these cards for their Battlecries or not is a factor to consider.

If there's an Unlicensed Apothecary in your hand, it's highly inadvisable to play this card as it will deal 5 damage for each Demon it put onto the board.

Kabal Trafficker is a very good card to include in a deck with Krul since they generate demons without breaking your deck's no duplicates requirement. Kazakus is also a good inclusion since his Shadow Oil potion adds demons to your hand and also follows the same deck requirements.

Summon
I am the Void. I am your master.

Attack
As I command.

Don't be fooled by the gnome at the front of the card: Krul is not the name of the warlock, but of its former servant, turned master. This mighty demon has enslaved the warlock that once commanded it, and now uses the magical chains of the Kabal to bind the gnome to its service, in cruel mockery of its former servitude.[1][2]

The gnome Spicklefizz originally offered his services to the Kabal, but unfortunately for the warlock Kazakus saw more potential in Krul than in his master.[2] Spicklefizz did however enter his bondage willingly: the eager gnome was so excited to enter the Kabal he signed Krul's contract without hesitation...[3] and possibly without reading it all the way through. In so doing his wish appears to have been granted, although it is unclear how happy he is with the way the deal worked out.

Both Krul and Spicklefizz are unique to Hearthstone.