Hearthstone Wiki
Register
Don't have an account?
Sign In
Advertisement
in: All cards, Wild format cards, Beast art,
and 2 more

This article is using {{Card template}}.
See Help:Style guide/Card for how to edit this kind of article.
Edit this article
Krag'wa, the Frog
50369 • TRL_345
Regular 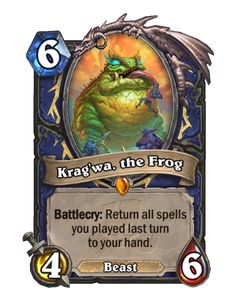 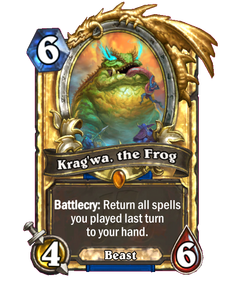 Krag'wa has a ritual to honor his friends and a ritual to devour his enemies. No one can tell them apart. 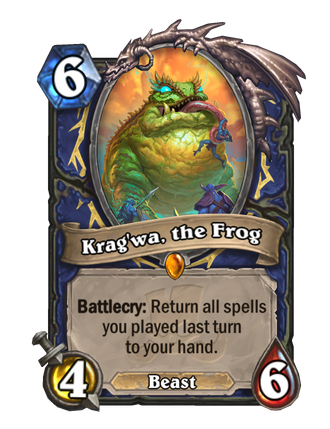 Krag'wa, the Frog is a legendary shaman minion card, from the Rastakhan's Rumble set. 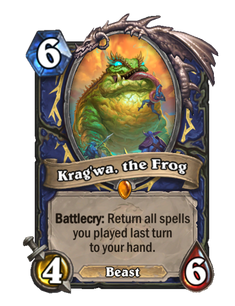 Krag'wa can be used to refill your hand with spells once you've used most of your spells. Examples of this being useful include:

Notably, if you used

Krag'wa the Huge is a frog loa worshiped by the Zandalari. He can be found at Krag'wa's Burrow located in the Frogmarsh in Nazmir. Krag'wa is a physically powerful loa, able to leap long distances and use his weight and tongue to devastate scores of enemies. He is also quite impulsive and demanding, requesting large amounts of offerings and food from his followers. He appears to be the father of the dire toads that inhabit the swamps of Zandalar.

Krag'wa aids Talanji's Expedition against the blood trolls during the Nazmir storyline.

In Hearthstone lore, Krag'wa serves as the patron loa of Krag'wa's Frogs, the shaman team in Rastakhan's Rumble.