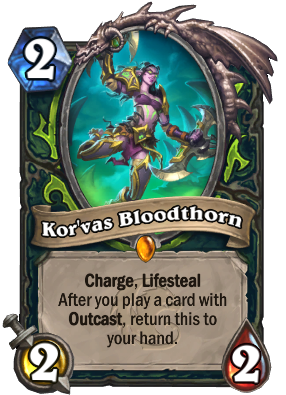 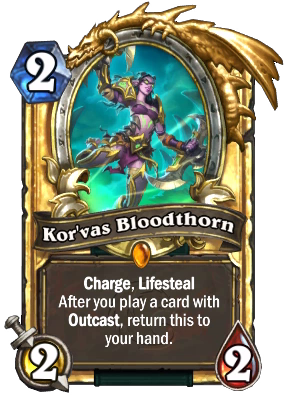 Charge, Lifesteal
After you play a card with Outcast, return this to your hand.
Flavor text

Illidan taught her that demon hunters should sacrifice EVERYTHING... but she still brought Lifesteal just in case.

Kor'vas Bloodthorn is a legendary demon hunter minion card, from the Core set.

Kor'vas Bloodthorn is uncraftable and cannot be crafted or disenchanted.

There are 107 achievements related to Kor'vas Bloodthorn.

Kor'vas Bloodthorn is a night elven demon hunter of the Illidari.

When she was young, Kor'vas watched her family members die at the hands of the Burning Legion (most likely during the War of the Ancients or the Third War). Thus, she decided to join the Illidari and become a demon hunter by cutting out her eyes and dedicating herself to the destruction of the Legion.

Kor'vas was present when Illidan Stormrage, Lord of the Illidari, was preparing his demon hunters to launch an assault on a demonic world ruled by the pit lord Azgoth. However, Kor'vas still harbored doubts; bending the knee, she openly asked Lord Illidan what made the Illidari — who had demonic energies coursing through their veins and gnawing at their every thought — different from the monsters they fought against. Illidan leapt down on the ground in front of Kor'vas and looked at her silently for a moment before rising to a standing position again. He then proclaimed to the Illidari that they would not sit idly like the inhabitants of Azeroth, waiting to become the demons' prey; instead, they would take the fight to the Legion's worlds and prey upon them. The demon hunters charged into the portal to Azgoth's domain, fighting their way through the felguard defenses of the demonic citadel. During the ensuing battle with Azgoth, Illidan was wounded by the pit lord's enormous flail. As the annihilan was about to finish the Betrayer, Kor'vas leaped forward and blocked the blow with her warglaive. In response, the annihilan backhanded her up against a wall and growled that she smelled "more demon than hunter" and that she would serve the Burning Legion well. Kor'vas simply replied "Never" as Illidan launched himself into the air and stabbed the pit lord in the back with the Twin Blades of Azzinoth, instantly killing him.