This article is using {{Card template}}.
See Help:Style guide/Card for how to edit this kind of article.
Edit this article
Kooky Chemist
40289 • CFM_063
Regular 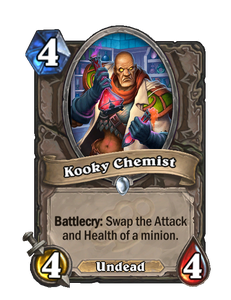 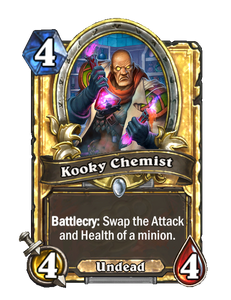 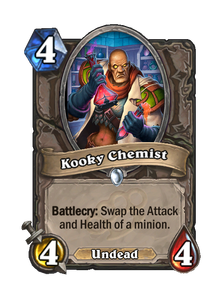 Kooky Chemist is a common neutral minion card, from the Mean Streets of Gadgetzan set.

This card is basically a more powerful version of Crazed Alchemist, due to its effect it can be used as a cheap way to destroy any 0-Attack minions like eggs, basic Totems like Wrath of Air Totem, or even the Doomsayer. In conjunction with Pint-Size Potion it can remove almost anything with 3 Attack or less.

When using this on your own minions, the typical strategies are targeting a minion with low Attack and high Health (e.g. an Ancient of Blossoms) for an unexpected burst of extra damage, or as a form of "healing with a disadvantage" on a damage larged minion (e.g. a Grimestreet Protector that has received 4 points of damage can be transformed from an easily removed 6-2 minion to a less threatening but harder to remove 2-6).

Attack
Have another dose!