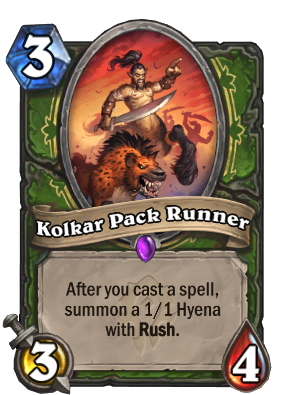 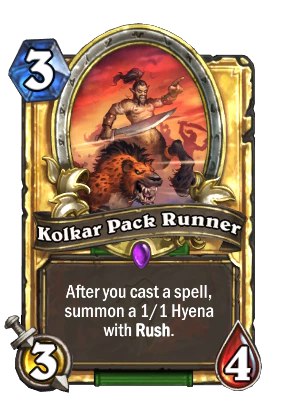 After you cast a spell, summon a 1/1 Hyena with Rush.
Flavor text

Is he running or galloping?

Kolkar Pack Runner is an epic hunter minion card, from the Forged in the Barrens set.

Kolkar Pack Runner can be obtained by: 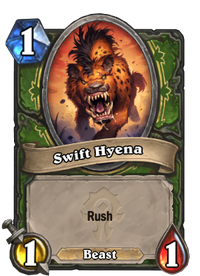 A generally more powerful, though Hunter-restricted, Violet Teacher. The stats-to-Cost ratio is superior, it is cheaper (enabling more Spells to trigger its effect the turn it is played), but perhaps most importantly, the Tokens it produces have Rush, giving them much more immediate impact. This aspect enables it to be used as a pseudo-board clear, trading the Hyenas into a menacing board, or it can be used more proactively, building a wide board cheaply - or, given its decent stats, it can simply be dropped on curve to threaten the opponent for the following turn.

To make the most out of this card, include many cheap spells that can abuse its effect. Good candidates include Wound Prey (or On the Hunt) and Arcane Shot, cards which also fit in the generally aggressive playstyle a deck running Kolkar Pack Runner would have. Spells that generate more spells, like Lock and Load, can be very strong when paired with this, while spells like Infest or Cybertech Chip can leverage the created board for additional value while also summoning an additional Hyena. Animal Companion and Demon Companion are very good with this, since as spells, they can trigger the Pack Runner's effect before potentially summoning Leokk or Kolek respectively to buff the Hyenas. While not a guarantee given the cards' random summon, this can be a potentially game-winning play; in particular, Demon Companion, costing only one Mana, can be used with the Pack Runner very easily.

Since it can summon multiple minions this card has obvious synergy with board-buffing effects; apart from the spells mentioned above, cards like Raid Leader, Barrens Blacksmith, Darkmoon Statue, or even more limited buffs like the one from Wriggling Horror, can all result in a rapidly dangerous board. Timber Wolf is very cheap, and can buff Beasts in particular. Since the Hyenas can be traded easily and immediately, they also have synergy with cards that benefit from minion death like Blood Herald.

Kolkar Pack Runner is a natural fit, in general, in decks that run a good amount of cheap spells while also caring about Tempo, such as Face Hunter or Midrange Hunter. It can also be very good in a deck making use of the Hunter Questline, Defend the Dwarven District, which encourages playing many spells.

There are 91 achievements related to Kolkar Pack Runner.