This article is using {{Card template}}.
See Help:Style guide/Card for how to edit this kind of article.
Edit this article
Knuckles
40678 • CFM_333
Regular 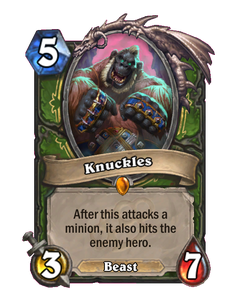 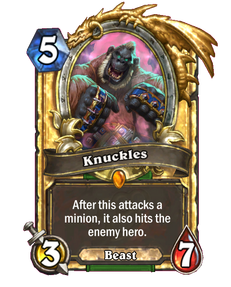 When confronted with accusations of performance-enhancing bananas, Knuckles replied, "I get my fruit from trees I knock down with my bare hands like everyone else." 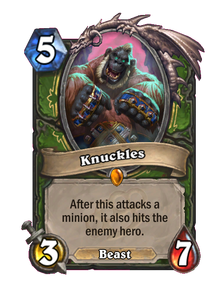 Knuckles is an legendary hunter minion card, from the Mean Streets of Gadgetzan set.

Since Knuckles inflicts damage twice when he attacks a minion (one time to the minion, another to the enemy hero), he is a good minion to buff, similar to minions with Windfury. Knuckles synergises very well with the Grimy Goons' card-buffing mechanics for the same reason. He is also a Beast, which make him eligible to be enhanced by cards such as Houndmaster, Bestial Wrath, or Dire Frenzy.

Knuckles should always trade with a enemy minion since it will always attack the enemy hero providing both aggro and board control.

Knuckles is significantly more powerful when given Rush, allowing him to use his effect without waiting a turn. Houndmaster Shaw, Guardian Animals, Animated Broomstick, etc., effectively gives him Charge since he always deals damage to the enemy hero on attack.

The Beast Within and Trueaim Crescent forces Knuckles to attack and add more face damage.

Knuckles is unique to Hearthstone. He is briefly mentioned in The Gadgetzan Gazette Volume 32 #7, where he escorts the news reporter out of the building after she asked Mayor Noggenfogger why he would be concerned with making the First Bank of Gadgetzan "unrobbable" after repeatedly denying the skyrocketing crime statistics in Gadgetzan.

On page 2 of The Gadgetzan Gazette Volume 32 #10, a sports article titled "Knuckles Defends Arena Title Amid Accusations Of Performance-Enhancing Bananas" and subtitled "Claims, 'I get my fruit from trees I knock down with my bare hands like everyone else'" discusses how Knuckles, the 32-time arena champion of Gadgetzan's Thunderdome, armed with nothing more than his watermelon-sized fists, seems to be an unstoppable force in the cage and how he is satisfied with getting paid in produce. The article goes on to describe that sports critics have been suspicious of Knuckles ever since the revelation that the fruit the gorilla is so fond of comes from a banana tree near a tainted pool by Sandsorrow Watch, with the proprietor of "Mad Larry's Completely Legitimate Watches" apparently claiming to have seen goblins go swimming in Sandsorrow and come out the size of orcs. The article concludes by stating that "Given the unregulated nature of the Gadgetzan Arena and officials' fear of being torn in half by an irate gorilla, it's unlikely that any action will be taken".