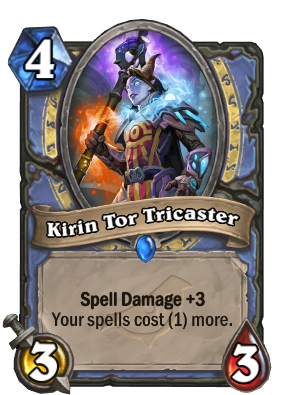 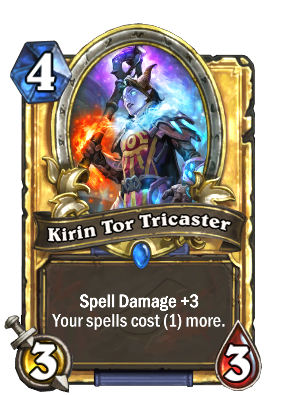 The math checks out!

Kirin Tor Tricaster is a rare mage minion card, from the Rise of Shadows set.

Kirin Tor Tricaster can be obtained through Rise of Shadows card packs, or through crafting.

Although this card is poorly for it stats, by itself it adds a large amount of Spell Damage, increasing the value of a lot of cards, at the cost of 1 mana more per spell. Arcane Missiles, for example, becomes a 2 mana card with 6 damage, a better version of Cinderstorm, while it will become a 4 mana Avenging Wrath. Arcane Explosion will become 3 mana Flamestrike, Fireball will deal one less damage than Pyroblast at half cost, and Unexpected Results will summon 2 minions with cost 5 mana each.

However, be careful, because it also increases the cost of spells that don't use Spell Damage: Arcane Intellect, Frost Nova, Polymorph, Luna's Pocket Galaxy, and even The Coin if you plan to use it after her, wasting the mana it will give to pay itself.

The Kirin Tor (sometimes spelled Kirin-Tor), also known as the Wizard Council of Dalaran, or the Magus Senate of Dalaran, is an elite cadre of the most powerful wizards in the known world, and the ruling conclave of magi that leads the magical nation of Dalaran, one of the seven human kingdoms. More specifically, they are governed by the Council of Six. The Kirin Tor were members of the original Alliance of Lordaeron. They have also upheld an alliance with Silvermoon for over 2,000 years, and the Council of Six itself once included Quel'Thalas' crown-prince Kael'thas Sunstrider, and the blood elf Aethas Sunreaver.

Once a secretive and selective order of magi that kept aloof from ordinary politics, the Kirin Tor has since become one of the foremost factions standing against the threats posed to Azeroth's survival - among them the Scourge, the Blue Dragonflight, the Iron Horde and the Burning Legion, with Dalaran becoming a focal point of the campaign against the demons and serving as a neutral ground where the heroes of every kingdom could join together against their mutual foe.