This article is using {{Card template}}.
See Help:Style guide/Card for how to edit this kind of article.
Edit this article
Kirin Tor Mage
748 • EX1_612
Regular 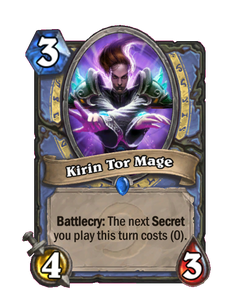 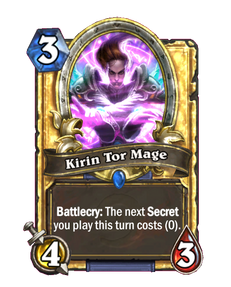 The Kirin Tor reside in the floating city of Dalaran. How do you make a Dalaran float? Two scoops of ice cream, one scoop of Dalaran. 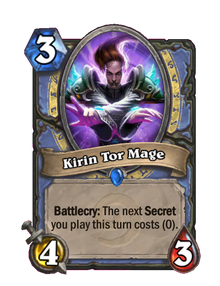 Kirin Tor Mage is a rare mage minion card, inducted into the Legacy set, formerly from the Classic set. 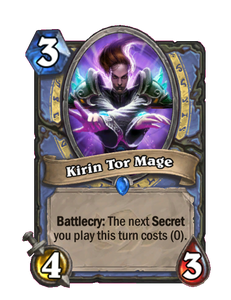 Example: If you play Kirin Tor Mage the turn after your opponent played Loatheb, the next Secret you play will cost 0; however, subsequent Secrets you play that turn will have their mana cost increased by 5, as well as any non-Secret spell you play that same turn.

Kirin Tor Mage is best used in a deck that has many Secrets. Since all mage Secrets cost 3 mana, you essentially receive a free 4/3 minion whenever you pair this card with a Secret.

The Kirin Tor is the elite conclave that leads the magical nation of Dalaran, one of the seven human kingdoms. Its members are some of the most powerful magi of Azeroth. Once a secretive and selective order of magi that kept aloof from ordinary politics, the Kirin Tor has since become one of the foremost factions standing against the threats posed to Azeroth's survival - among them the Scourge, the Blue Dragonflight, the Iron Horde, and the Burning Legion.

The Kirin Tor were members of the original Alliance of Lordaeron, and sided with the Grand Alliance toward the end of the Alliance-Horde war, eventually returning to neutrality. They have also upheld an alliance with Silvermoon for over 2,000 years, the elven kingdom's crown prince (and others) having served on the Council of Six. The Six lead the Kirin Tor as its governmental body.