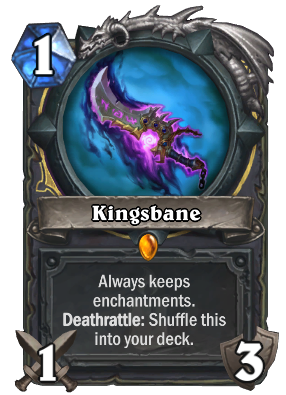 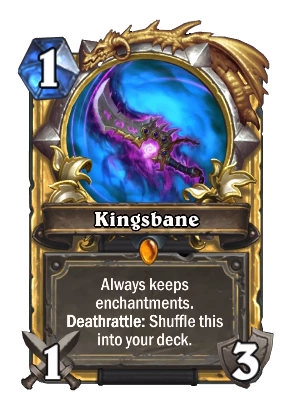 But it has a soft spot for emperors.

Kingsbane is a legendary rogue weapon card, from the Kobolds and Catacombs set.

Kingsbane can be obtained through Kobolds & Catacombs card packs, or through crafting.

Kingsbane is a high-value card for weapon-focused Rogue decks. At 3 Durability, it gets more value out of any weapon buffs like Deadly Poison than most other Rogue weapons, and its low cost makes it more convenient to use than other expensive Rogue weapons like Assassin's Blade. Its Attack is weak at the start, but after a few buffs the card more than pays for itself, and even more so when it's reused.

It has great synergy with Doomerang since it will retain your enchantments when it's returned to your hand.

You can use a Cavern Shinyfinder or Raiding Party to redraw your Kingsbane after it's been shuffled into your deck, allowing you to get continuous use out of it. You can make a deck with only a Kingsbane as your weapon to guarantee redrawing it.

You can prevent fatigue damage by equipping Kingsbane then use your Hero Power to destroy it to shuffle it into your deck, either with Dagger Mastery to destroy it every turn or Death's Shadow to shuffle in multiple copies of Kingsbane.

Beware if your opponent is using Kobold Stickyfinger, as one simple Battlecry can disarm your blade and give it and it's buffs to your opponent.

Kingsbane is an epic one-handed dagger that has a chance to drop from the 10-player version of Yogg-Saron in the Ulduar raid. The weapon's flavor text notes that "The blade carries with it a sense of deep sorrow." During the battle with Yogg-Saron, the Old God shows players visions of several key events, one of which is the assassination of King Llane Wrynn by the assassin Garona Halforcen. Yogg-Saron also drops another item by the name of Royal Seal of King Llane, whose flavor text notes that it is covered in blood that doesn't seem to wash away.

Due to these facts, Kingsbane was long speculated by players to have been the weapon Garona used to kill Llane. However, it was later revealed in World of Warcraft: Legion that Garona actually used a different pair of daggers, known as the Kingslayers, which are used as the artifact weapon for Assassination rogues in Legion (though the Kingslayers also grant the use of a spell known as Kingsbane).

Despite being named after Ulduar's Kingsbane, this card appears to instead be based on the appearance of the Kingslayers.