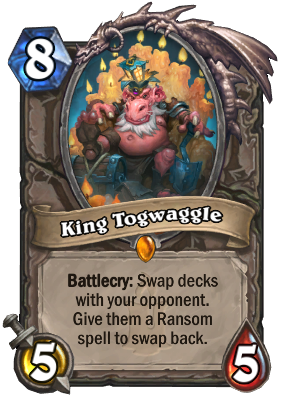 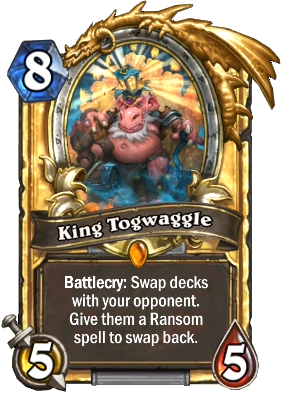 Collectible • Elite
Battlecry: Swap decks with your opponent. Give them a Ransom spell to swap back.
Flavor text

Management of the Kobold Empire requires a careful balance between a lack of social services and fiscal irresponsibility.

King Togwaggle is a legendary neutral minion card, from the Kobolds & Catacombs set.

King Togwaggle can be obtained by: 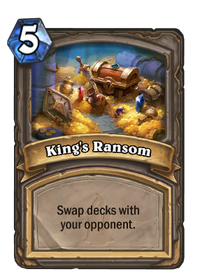 King Togwaggle, on his own, serves to disrupt tempo for players that need their deck for combo or synergy effects, but the opponent can decide to not switch if their hand or your own deck is good enough to win with. While for the most part this is an understatted and gimmicky card, his effect can be exploited to create unorthodox combos and win conditions.

One option is to create an intentionally bad deck consisting mostly of card draw, defensive cards, and combo pieces, then either make them not want to switch back or unable to switch at all. You can make the switch permanent by milling the King's Ransom. The mill method is best done with Naturalize. If you can draw out your deck beforehand, you can make them start taking fatigue damage. Counterspell or Mana Bind also works, but it can be played around. Another option is to play Explore Un'Goro after switching decks to replace the opponent's entire deck with 1-Mana Discover cards, then if they decide to switch back, play Skulking Geist to remove their entire deck.

Another way to guarantee keeping the opponent's deck is to use Azalina Soulthief to copy the opponent's hand after switching decks, thus giving you a King's Ransom to swap the opponent's deck back to you if they decide to switch them out. This is best done with Dreampetal Florist, the Jungle Giants quest, Twig of the World Tree, or the Aviana/Kun combo in Wild.

You can also use Murozond the Infinite after the opponent plays King's Ransom to switch decks back again.

Tracking has good synergy with King Togwaggle, allowing you to burn up to 6 cards from the opponent's deck. Naturalize is also a powerful combo. After giving your opponent an empty deck, two Naturalizes will deal 15 Fatigue damage to them.

"Now just who leads these tunnel-digging misfits of Azeroth, you may ask. What kind of luminary would it take to bring all the candles together under a single, albeit slightly brighter, candle of his own?"[1]
— Ben Thompson

Togwaggle is unique to Hearthstone. He is the ruler of all kobolds and is described as "the big cheese, the head rat, the be-candled King of the Kobolds".[2] He sports a crown with an actual lantern in place of the typical kobold candle,[1][3] has treasure strapped to his back for safekeeping (likely obtained mostly from other kobolds),[1] and wields a "regal shovel, lest anyone question his sovereignty".[1] There is a secret to the lantern he wears on his head;[1] it actually contains a fire elemental known as Rakanishu. Togwaggle is noted to be larger than his fellow kobolds (which isn't saying much) and is also rather more rotund, as there are apparently "culinary benefits" to being king.[3]

Togwaggle has a plan for how to deal with his ragamuffin subjects as well as the hostile monsters and loot-hungry adventurers found in the dungeons, and make the situation work for him:

Togwaggle's plan will come to fruition in the Kobolds and Catacombs Dungeon Run single-player experience, in which he also acts as the main host by offering "helpful advice" and "useful strategies" to the player along the way.[2]

Tale of the Fox[]

In a tale told by a dwarven bard in the Hearthstone tavern, Marin the Fox was exploring through the catacombs and making his way across a perilous rope bridge when a group of kobolds led by Togwaggle suddenly appeared at the tunnel entrance the adventurer was creeping toward. Togwaggle urged one of his followers forward onto the bridge, but the kobold was so intimidated by Marin that he only managed to say the words "Y-you. You adventurer..." before forgetting his lines, squeaking "You no take candle!" and hurrying back to its fellows, much to Togwaggle's frustration. The Kobold King instead began shouting at Marin, telling him that the tunnels were his and that the adventurer should drop his treasures right now. Marin pointed out that he hadn't obtained any treasure yet and argued that Togwaggle should let him pass so that he could go acquire some, and then he and the kobolds could have a do-over on the Fox's way out. While several of the kobolds were enticed by the idea, Togwaggle wasn't as easily convinced and instead said that "If you not be dropping, kobolds be taking!" before ordering his followers to summon a golem.[3]

The waxmancers obeyed and used their magic to create a giant candle golem, which stepped out onto the rope bridge to confront Marin. The adventurer, however, managed to blind the wax creature by blowing out the candle flames serving as its eyes and proceeded to make his way toward the end of the bridge, close to the kobolds. However, the confrontation was suddenly interrupted by the sound of an approaching pack of feral gibberers. Togwaggle quickly fled to the bridge, leaving his subjects behind without a second thought. The king's subjects followed after him, but as the other end of the bridge was still blocked by the blinded golem, the kobolds instead took cover behind Marin, forgetting their previous conflict in the face of a greater threat. Suddenly, the bridge gave way and collapsed, sending the adventurer, the golem, and the kobolds tumbling down into the chasm below.[4]