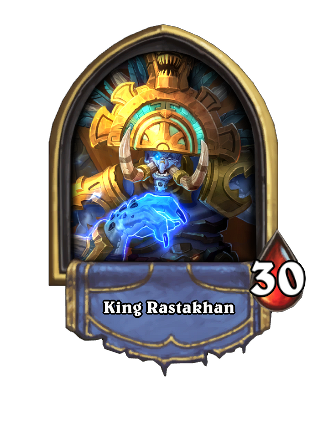 King Rastakhan is a hero skin for the shaman class.

God King Rastakhan (pronounced "RAH-stuh-kawn") is the ruler of the Zandalari Empire. He was blessed by the loa Rezan with a long life, swift healing, and strength beyond most trolls.

King Rastakhan rests on a golden throne, lording over all of the Zandalari. Empowered by the Zandalari gods themselves to act as their voice, he has ruled over two hundred years. King Rastakhan is consulted before every battle or major decision by the Zanchuli Council, which both advises the King and ensures his every command is executed.

When the word of Hakkar the Soulflayer's presence in Zul'Gurub reached the Zandalar tribe in the South Seas King Rastakhan sent emissaries to Yojamba Isle. There the trolls recruited champions from Azeroth's many races to defeat Hakkar.

Years ago Zul warned King Rastakhan of a terrible Cataclysm. For Zul had seen a vision of a great armored dragon clenching the world in his ferocious jaws. Months later Zul returned, bearing more grim news from his visions. Still, King Rastakhan did nothing. Finally, mere months before the Cataclysm, Zul returned. He described the golden capital of Zandalar slowly sinking beneath the waves in the aftermath of the Cataclysm, its once-great people drowning as their mighty works slipped forever beneath the sea. Zul advised the council and King Rastakhan to unite with the other troll tribes and to abandon their doomed homeland. Despite Zul's infamy, the council refused to believe in the scope of the disaster to come. Many felt that Zul was grandstanding to increase his own status and power. King Rastakhan grew tired of Zul and his troubling nightmares. To be rid of the prophet, he granted Zul the use of his largest ships, so that he and his followers could seek a new land if his visions came to pass. They scoffed as he and his followers began assembling a war fleet and reaching out to the lesser troll races.

But Zul's vision were visions of the truth. Deathwing's Cataclysm rocked Zandalar to its foundation. The spine of the land broke in two, and soon, the city and all its riches began to slide into the hungry sea. The Zandalari people turned to their King for help, but there was only one Zandalari equipped to help them: the prophet Zul. Even now the mighty and enigmatic troll empire slides into the sea, and Zandalari peasants and warriors alike flock to Zul for guidance on what to do next. Led by Zul, the Zandalari have issued a call to Azeroth's embattled troll populations: unite into a single mighty empire and save their race from extinction. Meanwhile Rastakhan is still sitting on his throne in Zandalar as the island sinks around him.

Rastakhan's empire was sinking into the sea, and Zul had a way out - Rastakhan supported the Zandalari's efforts to make a new troll empire. Vol'jin has said that it was Rastakhan's plan to unite the troll tribes. However, he was against the plan to resurrect Lei Shen.

Seeking the Zandalari's legendary navy, the Horde arrived in Zandalar with Zul and Talanji, who had in turn sought the Horde out in secret to aid them against threats to the trolls. While General Jakra'zet of the Zanchuli Council was disgusted by the Horde presence on Zandalar, Rastakhan allowed them to stay because they saved Talanji from the Stormwind Stockades. He names a Horde adventurer the Speaker of the Horde, and assures them that while Talanji says he is ignoring the threats to his kingdom, he is not as blind as she thinks.

Seeing Rastakhan as a weak king and the loa as weak gods, Zul sought to overthrow Rastakhan and create a new troll empire with G'huun as its god. He also planned on reviving the first king, Dazar, to rule in Rastakhan's stead. Zul attacked Rastakhan and nearly killed him, but Rastakhan was saved by Pa'ku who brought him to Zeb'ahari. With Rastakhan unconscious, Bwonsamdi, the loa of death, claimed his soul. The Zandalari contacted Rezan, loa of kings, who forced Bwonsamdi to give up the king's soul, but Bwonsamdi promised he would be seeing Rastakhan again soon. At Rezan's temple, Zul's followers sought to drain Rezan of his power in the same way the Drakkari once did to their loa. Rastakhan and an adventurer slew Vilnak'dor, the troll performing the ritual, and once he was freed Rezan unleashed his fury upon the Atal'zul and their Kao-Tien allies. Afterward, Rezan convinced Rastakhan to realize he had grown soft and Rastakhan swore to take Zul's head.

When the time came to hunt Zul, Rastakhan gathered together the loa of Zuldazar and led the charge into Atal'Dazar atop Mount Mugamba. However, during the confrontation with Zul, Rezan was slain. Without his power keeping Bwonsamdi at bay, Rastakhan began aging fast. After a blood troll attack on Zuldazar, Rastakhan made a deal with Bwonsamdi: If Bwonsamdi gave him the power to take back his empire, then Rastakhan would elevate Bwonsamdi above all other loa in the Zandalari pantheon. Bwonsamdi accepted the deal on one condition: that the king's bloodline would be devoted to Bwonsamdi, to serve him in life and in death. Later, as Dazar'alor came under attack from Zul and Mythrax, Bwonsamdi empowered Rastakhan to kill Zul. He happily congratulated Rastakhan on taking back their empire.

In Hearthstone, Rastakhan serves as the namesake host of Rastakhan's Rumble, a massive gladiatorial event in the Gurubashi Arena.

King Rastakhan, the all-powerful god-king of the Zandalari trolls, presides over the once-a-generation event held in his name. Rumble fans are converging from all corners of Azeroth on the renowned Gurubashi Arena to attend a knock-down, drag-out, no-holds-barred, rough-and-tumble, beautifically brutal gladiatorial celebration of all things troll: Rastakhan’s Rumble!
It’s an event like none other! You’ll THRILL to the roar of the crowd and the incredible crash of thudding flesh and searing spells. You’ll savor the scent of fresh funnel cake on the air! Witness with breathless anticipation as world-renowned troll gladiators put their mojo on the line to clash with magic and might--in style! When the Loa call your name and team spirit fills your thundering heart, nothing’s gonna stop you from leaping into the arena to JOIN the gladiatorial mayhem!
Just remember the rule of the rumble:
THERE ARE NO RULES![1] 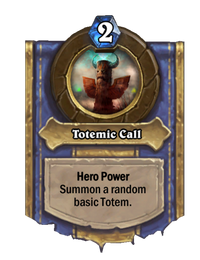 Once unlocked and selected for use, King Rastakhan replaces Thrall whenever the player uses a Shaman deck, as well as:

When viewed in the Collection, King Rastakhan has the following flavor text:

King Rastakhan rained over Zandalar for two hundred years. (It was a rain of frogs.)