This article is using {{Card template}}.
See Help:Style guide/Card for how to edit this kind of article.
Edit this article
King Mukla
1693 • EX1_014
Regular 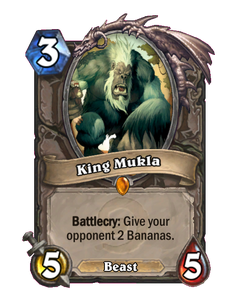 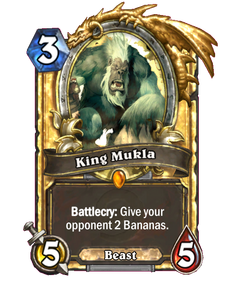 King Mukla is a legendary neutral minion card, inducted into the Legacy set, formerly from the Classic set. 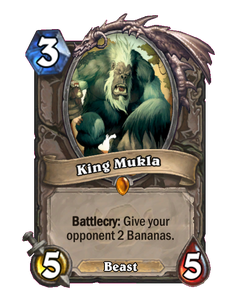 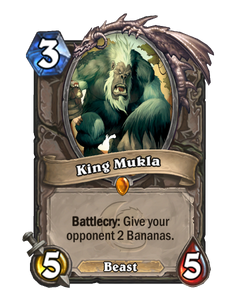 Regular King Mukla (Core) is obtained for raising sum of all your class levels to 32.

Golden King Mukla (Core) is obtained for winning 5000 games across all classes.

King Mukla (Core) is uncraftable and cannot be crafted or disenchanted. 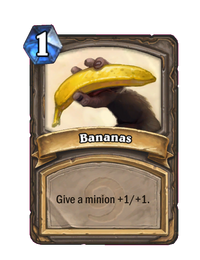 "Why are these monkeys throwing bananas at me?" - Jaina, Tutorial

King Mukla is a very powerful card with a very low cost which can devastate the early game in your favor. The trade-off for this is that your opponent will receive two Bananas which can be used to buff their minions by 1/1 for 1 mana each; they can also be useful for triggering a Combo, or to increase the card count in their hand for cards like Twilight Drake.

King Mukla is best played when your opponent has no minions, as the Bananas will otherwise make it even easier for the opponent to remove Mukla from the board.

The Banana cards can also be used to your advantage. Minions such as Goblin Sapper and Clockwork Giant can benefit from the opponent's increased hand size. Forcing your opponent to overdraw and lose cards in their deck is also made easier by the Bananas.

Mukla is much more effective when paired up with the druid quest Jungle Giants. Furthermore, Mukla can also be summoned by Oaken Summons which negates Mukla's battlecry.

King Mukla is a hostile mob in World of Warcraft. King Mukla is a giant skymane gorilla found on Jaguero Isle in The Cape of Stranglethorn. Mukla captured a tauren princess and you must save her on the quest Mukla's Demise.

Mukla appears within the alternate reality of Whispers of the Old Gods as the corrupted Mukla, Tyrant of the Vale.