This article is using {{Card template}}.
See Help:Style guide/Card for how to edit this kind of article.
Edit this article
King Mosh
41425 • UNG_933
Regular 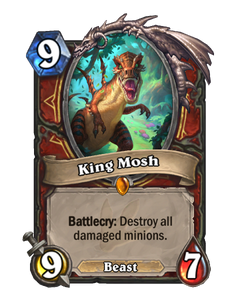 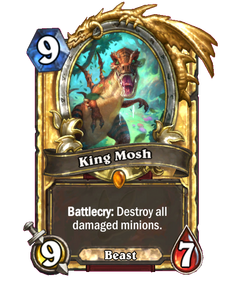 He's a terror at concerts. 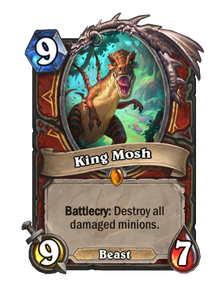 King Mosh is a legendary warrior minion card, from the Journey to Un'Goro set.

King Mosh can be used in combination with cards such as Whirlwind, Ravaging Ghoul, Blood Razor, Scourgelord Garrosh, or Death's Bite to act as an effective board clear. Be wary of trying to pull this off over two turns, especially when playing against Priest, who may be able to heal their minions back to full health with cards such as Holy Ripple or Holy Nova.

King Mosh is a rare elite devilsaur who roams around northwestern Un'Goro Crater. He is infamous for being extremely powerful for his level, making him able to kill unattentive lower-level players with ease, and for having been the most powerful rare mob in World of Warcraft prior to the Burning Crusade expansion.