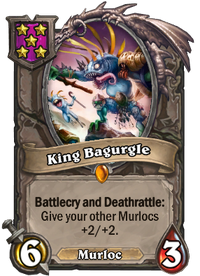 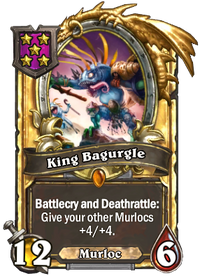 Battlecry and Deathrattle: Give your other Murlocs +2/+2.

King Bagurgle is a Tier 5 minion in the Battlegrounds game mode.

King Bagurgle is a strong late-game option for Murloc warbands, giving a boardwide buff akin to Goldrinn, the Great Wolf. Because its buff is split into a Battlecry and a Deathrattle, it can be useful with both Brann Bronzebeard and Baron Rivendare, moreso the former due to Murlocs' lack of Deathrattle synergies, and can be kept to fill out a board slot or simply used as a cycling buff akin to Coldlight Seer. If kept, Bagurgle should ideally be played on the very left side to trigger its Deathrattle as early as possible.