King's Elekk is a common hunter minion card, from the Grand Tournament set.

King's Elekk can be obtained through The Grand Tournament card packs, or through crafting.

A good tool for hunter control decks. Even when losing the Joust, King's Elekk has good enough stats to contest other minions in the early game. It could be considered a strictly better version of Bloodfen Raptor, due to having identical stats and cost but, if winning the Joust, with an added effect. 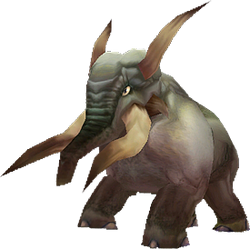 Elekk are a species of large, elephant-like creatures native to Draenor that the draenei commonly employ as mounts. Elekk became sickly and corrupt as a result of Draenor's fel corruption and subsequent transformation into Outland.

Patient and strong, the Elekk exemplify the draenei attitude towards the hardships of life. It is said an elekk never forgets.