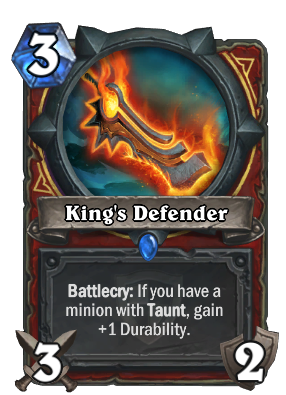 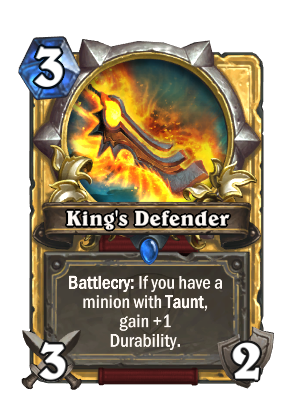 Battlecry: If you have a minion with Taunt, gain +1 Durability.
Flavor text

King's Defender is a rare warrior weapon card, from the Grand Tournament set.

King's Defender can be obtained through The Grand Tournament card packs, or through crafting.

King's Defender can be used in a deck that runs many Taunt minions like Quest Warrior, as well as cards that give Taunt like Sparring Partner.

It's strictly superior to Fiery War Axe, following its nerf though this only applies in Wild.

King's Defender is an epic one-handed sword that can be acquired from winning the Chess event in Karazhan. The card's flavor text appears to be purely humorous, since no shield named King's Attacker exists.