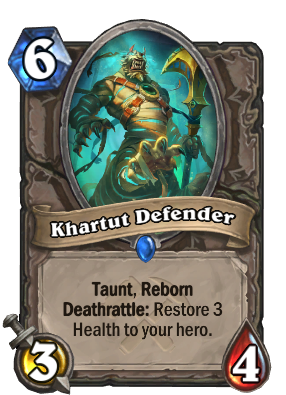 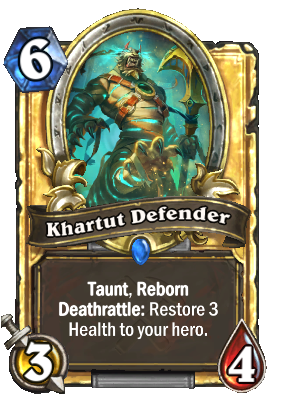 Khartut Defender is a rare neutral minion card, from the Saviors of Uldum set.

Khartut Defender can be obtained through Saviors of Uldum card packs, or through crafting.

This card, despite its relatively low statline, is a good defensive minion for its Taunt and healing. Having Reborn makes it tougher to remove, as well at triggering its Deathrattle twice to heal for 6 Health. It fills the same niche as Rotten Applebaum.

Khartut's Tomb is a tomb located within the Gate of Unending Cycles of Uldum. It's here after the expedition the adventurer joins is ambushed, captured, and take to the Lost City of the Tol'vir that Harrison Jones defeats the pygmies and prepares to enter the tomb. After setting up all the explosives a sand pygmy causes the explosives to go off too soon blowing Harrison and his companion to the Obelisk of the Stars. The explosion does not even dent the sealed doorway.

As legend has it the Coffer of Promise lies within this tomb, however, Harrison was incorrect to believe it was in this particular one.