This article is using {{Card template}}.
See Help:Style guide/Card for how to edit this kind of article.
Edit this article
Kezan Mystic
2042 • GVG_074
Regular 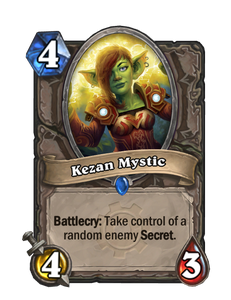 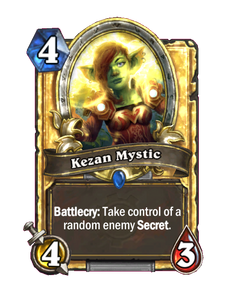 They pretend to be wise and enlightened, but they mostly just hate to be left out of a secret. 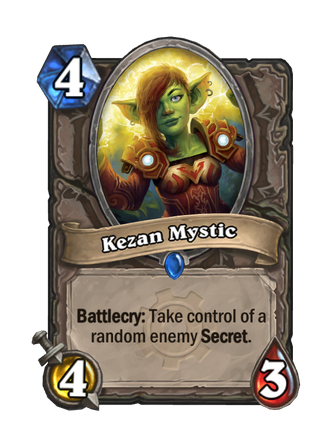 Kezan Mystic is a rare neutral minion card, from the Goblins vs Gnomes set.

This card is a useful counter to decks that use a lot of secrets. As well as providing a valuable secret in addition to the minion itself, the effect can also disrupt the opponent's strategy, and work around specific defences they had in place. For example, a hunter relying on a

Freezing Trap to prevent an enraged

Grommash Hellscream from dealing lethal damage to him can be undone by using Kezan Mystic to first steal the Trap. Alternatively, a player can use the Mystic to steal an

Ice Block, allowing them to deal fatal damage to an otherwise soon to be immune mage. The Kezan Mystic means that players cannot always rely on their secrets to take effect, and unlike

Flare is available to all classes.

Kezan Mystic can be played immediately after killing a

The Mystic is a decent body in itself, and is a reasonably mana-efficient play whichever secret is stolen. Advanced players can anticipate which secret the opponent currently has active, and wait until a particularly desirable one is available to steal; or even carefully trigger one of multiple secrets, in order to ensure that the correct one is stolen. The player can also take into account any secrets they already have active, as the Mystic will not steal duplicate secrets; this can similarly allow them to pick specific secrets when the opponent has more than one active.

The Isle of Kezan is the tropical island homeland of the goblins located in the South Seas.

A mystic is a loosely-defined class among many races. The majority of mystics use shamanistic magics, although others use nature, arcane or shadow spells. However, most use magic from only one such school.

The Kezan Mystic, according to her quotes, draws her magic from the Light.