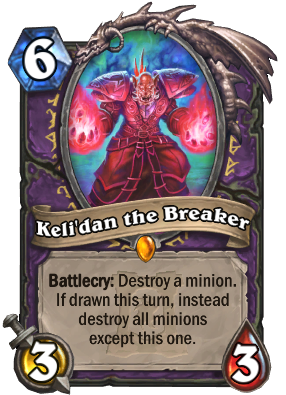 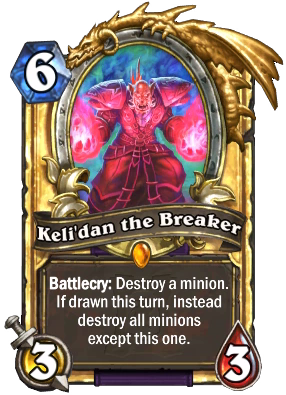 Battlecry: Destroy a minion. If drawn this turn, instead destroy all minions except this one.
Flavor text

He calms down a lot if you just give him a turn.

Keli'dan the Breaker is a legendary warlock minion card, from the Ashes of Outland set.

Keli'dan the Breaker can be obtained through Ashes of Outland card packs, through crafting, or as an Arena reward.

Keli'dan is an Assassinate on a 3/3 body that is sometimes instead a Twisting Nether. While the Twisting Nether form is obviously much stronger, the other effect is more practical since it doesn't rely on draw luck, and is still a solid use of the card.

It's important to think ahead when playing Keli'dan. Even though Keli'dan's effect only lasts for one turn, he in't always the best board clear. It may still be better to clear the board with a Twisting Nether or Hellfire and save Keli'dan to flexibly remove an important enemy minion. Whether you need more targeted destruction or more mass clears depends on the match-up as well as the rest of your hand.

Unlike cards like Flik Skyshiv and Vilespine Slayer, Keli'dan works best in a slower Control Warlock than he does a tempo or zoo deck. If you're ahead or equal on the board, his mass destruction effect is a downside, making him a dead card for the turn if topdecked. Drawing dead cards is incredibly bad for tempo-based decks.

Plot Twist synergizes well with Keli'dan. If you need Keli'dan's mass effect but he isn't active, you can shuffle him into the deck and attempt to redraw him. Plot Twist is also good for searching for him, giving you lots of opportunities to draw him in one turn.

Keli'dan the Breaker, the fel orc jailor of Magtheridon, is the final boss in the Blood Furnace wing of Hellfire Citadel.

When Illidan overthrew the pit lord Magtheridon and took control of Outland, he had the demonic leader imprisoned beneath the Hellfire Citadel. Only the most stalwart among Illidan's forces could ever hope to keep him contained; the ruthless orc, Keli'dan, was the only possible choice.