For other representations of Kel'Thuzad, see Kel'Thuzad (disambiguation). 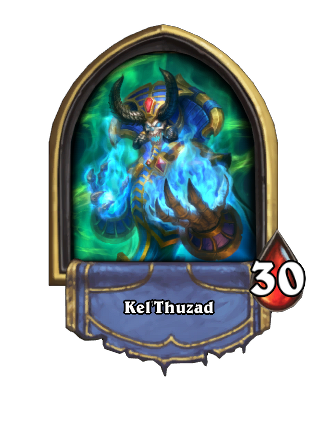 Kel'Thuzad is an alternate hero for the mage class.

Kel'Thuzad is the final and main boss in the Naxxramas raid. As an undead lich and a powerful necromancer, Kel'Thuzad has the ability to bring creatures back from the dead. He first appeared in Hearthstone as the antagonist of the Curse of Naxxramas adventure.

In Curse of Naxxramas

The Lich King’s words were both a threat and a promise. Kel’Thuzad would become his lieutenant, carrying out the Lich King’s whims, but in return he would gain power beyond his wildest dreams. Kel’Thuzad accepted these terms… as if he had much of a choice in the matter.[1]

In World of Warcraft

Kel'Thuzad is currently unavailable for obtaining.

Once unlocked and selected for use, Kel'Thuzad replaces Jaina Proudmoore whenever the player uses a Mage deck, as well as:

When viewed in the Collection, Kel'Thuzad has the following flavor text:

From Archmage to Archlich, Kel’Thuzad defies convention. Conventions like, “staying alive” or “being nice.”