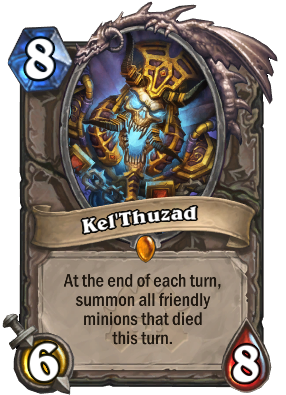 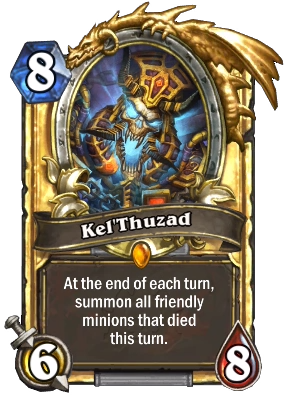 At the end of each turn, summon all friendly minions that died this turn.
Flavor text

Kel'Thuzad could not resist the call of the Lich King. Even when it's just a robo-call extolling the Lich King's virtues.

Kel'Thuzad is a legendary neutral minion card, from the Naxxramas set.

Regular Kel'Thuzad is obtained by defeating every boss in Curse of Naxxramas.

As a Wild-format card, both regular and golden versions of Kel'Thuzad can also be crafted for the following amounts:

Kel'Thuzad's triggered effect activates at the end of the player's turn AND the opponent's turn,[6] making him a potent presence on the board until neutralized.

It is very useful when in a position to trade minions with the enemy, allowing the player to effectively gain a free board clear that turn, or remove a powerful enemy without losing all their minions in the process. It can also be combined with Reincarnate to a get second Kel'Thuzad on turn 10 (Ancestral Spirit or possibly Redemption could also work).

However, running Doomsayer in a deck simply for the combo is not a good idea, since it can be killed without damaging your opponent's minions and will not be good as a standalone minion. Playing Kel'Thuzad in a Freeze Mage deck may similarly be ineffective since not many useful minions can be returned in Freeze Mage. On the other hand, playing this combo in a mill deck, with Dancing Swords (and Baron Rivendare) could be successful; a dedicated mill deck, particularly in mage, typically stalls in order to fatigue the opponent, and so the Doomsayer could be useful even without the full combo.

A friendly Kel'Thuzad can be copied by a Faceless Manipulator (or two) for an incredibly powerful late game combo. The opponent will be unable to permanently destroy any enemy minions without first neutralising both (or all three) Kel'Thuzads. Destroying any Kel'Thuzad will only lead to the others resurrecting him at the end of the turn. Because each resurrection happens for every surviving Kel'Thuzad, if three Kel'Thuzads are on one side and one dies, it will come back as two more Kel'Thuzads, and so on.

Using Kel'Thuzad with a corrupt card such as Strongman is another powerful combo, allowing you to cheat mana and protect Kel'Thuzad himself with a devastating burst of tempo.

Also as of August 2014, Kel'Thuzad may fail to resurrect minions which have died during the "Start of Turn" phase. This has also been acknowledged as a bug.[7]

Kel'Thuzad is the final and main boss in the Naxxramas raid. As an undead lich and a powerful necromancer, Kel'thuzad has the ability to bring creatures back from the dead.

In life he was a Human Mage who once served the Kirin Tor, but was cast out for his interest in forbidden necromancy. He joined The Scourge, pledging fealty to The Lich King and starting the Cult of the Damned. He was granted the floating Nerubian citadel Naxxramas for his fealty, and also struck a corrupt deal with Lord and Lady Barov to establish the Scholomance Academy as a further cover for the activities of the cult.

He was eventually struck down by Prince Arthas. Then, after Arthas' own fall from grace and corruption into the next iteration of The Lich King, Kel'thuzad was resurrected to serve the Scourge once again, this time as a powerful archlich tasked with summoning the demon Archimonde into Azeroth.

The Lich King’s words were both a threat and a promise. Kel’Thuzad would become his lieutenant, carrying out the Lich King’s whims, but in return he would gain power beyond his wildest dreams. Kel’Thuzad accepted these terms… as if he had much of a choice in the matter.[8]