Edit
watch 02:52
Roblox: DeepWoken - The Loop
Do you like this video?
Play Sound
Kayn Sunfury
Regular 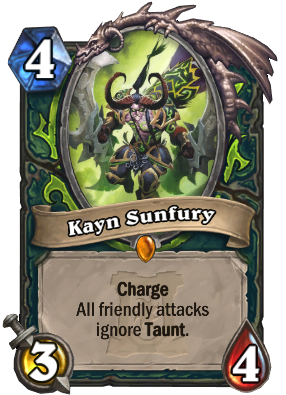 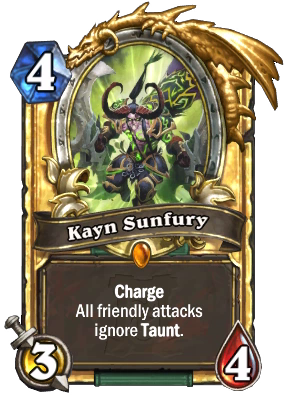 "Armor and heals may slow my zeal, but fel and glaives excite me!"

Kayn Sunfury is a legendary demon hunter minion card, from the Ashes of Outland set.

Kayn Sunfury can be obtained through Ashes of Outland card packs, through crafting, or as an Arena reward.

Kayn Sunfury is a flexible aggressive card with decent stats and the coveted Charge keyword. Whether going face or trading with an enemy minion, he is a good tempo play in either case, and has just enough Attack and Health to kill weaker minions easily while being able to survive.

On the other hand, he can be saved as a finisher, where his ability to negate the enemy's Taunt can be extremely valuable. He is excellent at dealing with big tempo swing plays like Mass Resurrection, where they often tend to summon Taunt minions to halt aggression on the following turn, or at playing around healing or board-wiping Deathrattle Taunt minions like Convincing Infiltrator and Khartut Defender. If the opponent doesn't wipe your board first, Kayn can spell a crushing defeat for them. Defensively, Kayne can also be used to kill a soft taunt minion hiding behind Taunt minions, effective for if you lack direct damage.

Kayn Sunfury is a blood elf demon hunter. He is a loyal soldier and one of Illidan Stormrage's most trusted lieutenants. Honorable and demanding, as well as a fearless leader and a master strategist, he believes that cooperation and sacrifice are necessary to defeat the Burning Legion. Kayn follows Illidan's ideals to get the job done, no matter the cost.

Kayn is one of two characters player demon hunters can choose to be their second-in-command, the other being Altruis the Sufferer, whose ideals and plans for the Illidari are incompatible with Kayn's own.