This article is using {{Card template}}.
See Help:Style guide/Card for how to edit this kind of article.
Edit this article
Kathrena Winterwisp
46390 • LOOT_511
Regular 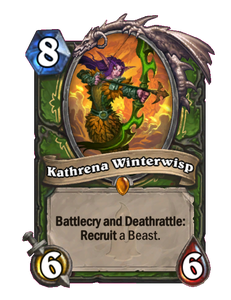 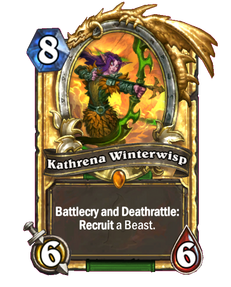 She’s not one of those treehugger elves – but she does like the occasional cuddle. 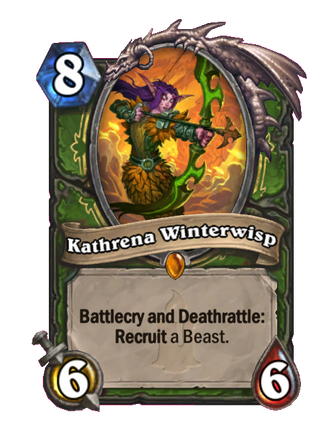 Kathrena Winterwisp is a legendary hunter minion card, from the Kobolds & Catacombs set.

Primarily, Kathrena can be seen as an effective way to thin out your deck and summon powerful minions onto the battlefield immediately.

As Kathrena summons Beasts from your deck, she is optimally used in a Hunter deck which only runs powerful, expensive Beasts such as

Savannah Highmane to maximize value out of her effects.

Charged Devilsaur gets a minor boost from being recruited in that it avoids its Battlecry, meaning it can attack the enemy hero on the same turn. Its deathrattle also has synergy with Hunter's Deathrattle-activated cards, such as

Terrorscale Stalker, as well as

Kathrena Winterwisp is a night elf quest giver at the Grove of the Ancients in Darkshore.

She later becomes a garrison follower.

In Hearthstone lore, Kathrena is working alongside

Marin the Fox, and

Master Oakheart in the catacombs.[1] She is "basically [the] complete opposite" of Alanna, whom she tends to drive a little crazy.[2]