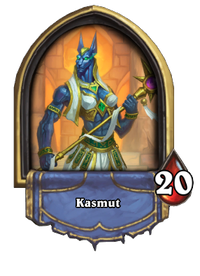 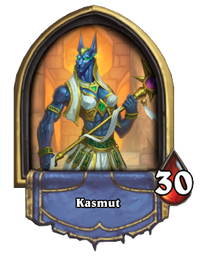 This anubisath over-achiever prefers to re-raise the extra dead.

Kasmut is a boss that can be encountered initially in Chapter 3 of Tombs of Terror. After completing Chapter 3, this boss encounter will be available in any completed chapter.

These decks correspond only to level 4. If this boss is encountered on level 3, her deck will be missing 5 random cards.

Kasmut
Your intrusion only worsens the plagues!

Kasmut
Leave! Your knowledge cannot help against the plagues.
Elise Starseeker
I come equipped with more than just knowledge.

Kasmut
You are barking up the wrong tree.

Kasmut
At least you can leave if you want to. I am on a short leash.
<Dog-like barking>

You have been chosen... to come back.

Death is but the next journey.

Stop these fools from making it worse!

Our kind has suffered too much.

You heed the wrong master!

Kasmut
Now there is another league to conquer...

Kasmut is unique to Hearthstone.