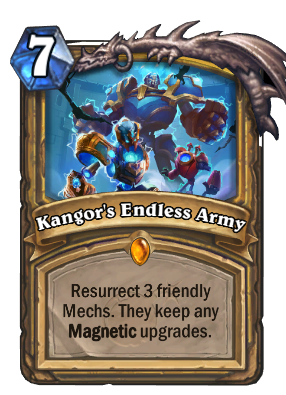 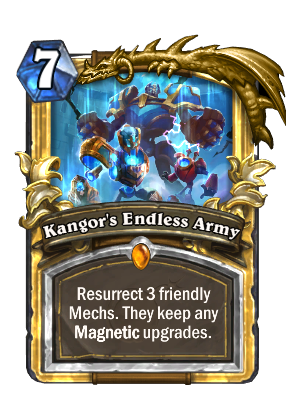 Kangor's Endless Army can be obtained through The Boomsday Project card packs, or through crafting.

Kangor's Endless Army is a strong value play for Midrange Paladin decks. You can resurrect up to three powerful minions in one turn, potentially swinging the game heavily in your favour. Some of the best Magnetic mechs to use with this card are: Glow-Tron, providing an early game body to give Magnetic to as well as a buff for later; Skaterbot, giving summoned minion Rush; Annoy-o-Module, granting Taunt and Divine Shield, and Zilliax, attaching a number of useful keywords to a mech. The best case scenario is to summon 3 mechs with Zilliax and two Skaterbots among them, allowing you to take hold of the board even as you summon the minions thanks to Rush.

If playing with Kangor's Endless Army, it's important to make sure you don't have too many small or unmagetized mechs die throughout the game. This could result in the spell summoning few or no big mechs, turning your value play into a complete waste. It's also important to keep your Magnetic buffs decently spread out, so that you can resurrect a good number of minions and avoid being obliterated by a single Silence from your opponent.