This article is using {{Card template}}.
See Help:Style guide/Card for how to edit this kind of article.
Edit this article
Kalecgos
53002 • DAL_609
Regular 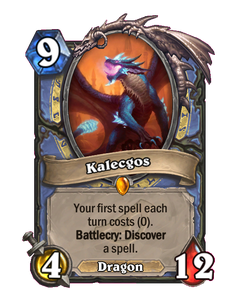 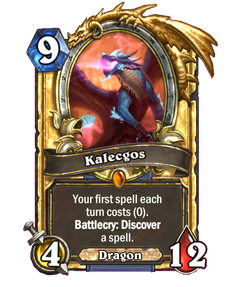 He was once the Aspect of Magic but gave it up to focus on cheap tricks. 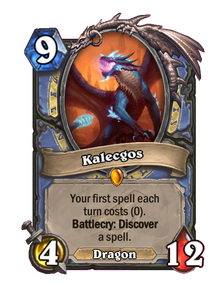 For other representations of Kalecgos, see Kalecgos (disambiguation).

Kalecgos is a legendary mage minion card, from the Rise of Shadows set.

When summoning Kalecgos, if you have no spells in your hand, it's generally best to Discover the highest-Mana spell possible, so you can get the most value out of a single turn. Alternatively, you can try and fish for a specific card, such as Frost Nova to delay your opponent or Arcane Intellect to dig through your deck.

You don't always have to play Kalecgos for the card he Discovers. If you were planning on playing an expensive card like Flamestrike (or even Frost Nova and passing), it's not a bad idea to summon Kalecgos first to generate a card and put a threat on the board.

Don't forget that if you attempt to use The Coin to summon Kalecgos when you have 9 Mana, Kalecgos' spell cost-reduction effect won't activate, as "the first spell you cast this turn" was already the Coin.

A good combo to use alongside Kalecgos is to destroy him using Conjurer's Calling. This will summon two 10 cost minions and will put a major threat on your side of the board, forcing your opponent to deal with them.

Kalecgos is the former Leader and Aspect of the blue dragonflight and former Aspect of Magic, after the death of Malygos. His mortal form is half-human, half-elven calling himself Kalec. Due to the blues being most in tune with magic of all the dragonflights, Kalec has the powers of a sorcerer and the strength of a warrior.

Prior to the Nexus War, Kalecgos was Malygos' investigator, and became involved in the search for residual energies of the Sunwell. He opposed Malygos' war against mortal spellcasters and became the blue dragonflight's ambassador to the Wyrmrest Accord.

During the events of the War against The Lich King, Kalec decided to not stand with Malygos. He allied himself with Alexstrasza and the Wyrmrest Accord to help stop his former master.

With the rise of Deathwing during the Cataclysm, Kalecgos was named the new Aspect of Magic and aided his fellow Aspects and the mortal adventurers in the battle with the Aspect of Death. After his defeat the blue dragons went their separate ways; Kalec has joined the Kirin Tor and now resides in Dalaran to pursue a relationship with its new leader, Jaina. He has since become one of the Council of Six.