This article is using {{Card template}}.
See Help:Style guide/Card for how to edit this kind of article.
Edit this article
Kael'thas Sunstrider
56622 • BT_255
Regular 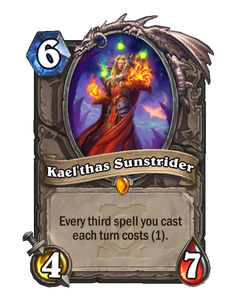 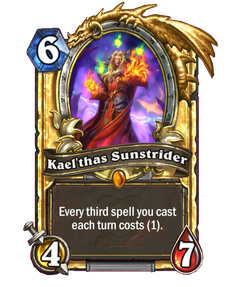 “Descent of Dragons was merely a set back!” 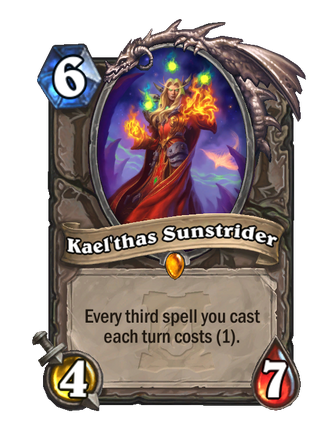 Kael'thas Sunstrider is a legendary neutral minion card, from the Ashes of Outland set.

Regular Kael'thas Sunstrider is obtained by owning an Ashes of Outland pack and going to Open Packs menu.

Golden Kael'thas Sunstrider is obtained by completing the Trial by Felfire Challenge missions.

Kael'thas Sunstrider is uncraftable and cannot be crafted or disenchanted.

Kael'thas Sunstrider was obtained by logging into Hearthstone from March 17 to June 29, 2020.[1]

Kael'thas works best in Combo decks as a way to cycle through cards extremely quickly or enable large amounts of burst damage. When building a deck around Kael, you need to mix plenty of low mana spells with high cost ones, giving you ways to trigger Kael's effect reliably. Zero mana spells like

Like most other Legendaries with Triggered effects, never expect Kael'thas to survive your opponent's turn. He is almost certainly a priority kill for your opponent, so it's best to make the most of his effect the turn he's summoned.

Most classes can take some advantage of Kael's effect.

Kael'thas Sunstrider was the Prince of Quel'Thalas, the last of the Sunstrider dynasty, as well as a senior member of the Kirin Tor. After the fall of Quel'Thalas, Kael'thas led what remained of his people, the sin'dorei, in the service of the Alliance. Striving to placate his people's addiction to magic, he later covertly allied with Illidan Stormrage, but betrayed him to the Burning Legion when its master, the demon lord Kil'jaeden, enticed Kael with the promise of salvation for the blood elves.

He was branded a traitor after his allegiance to the Legion was revealed, losing the support of Quel'Thalas. Defeated in the Tempest Keep, he would be brought back by his demon masters and return to Azeroth a shadow of his former self. Kael'thas' purpose was to summon Kil'jaeden through the Sunwell, but his plans were foiled by the Shattered Sun Offensive agents and the sacrifice of Anveena Teague. He was defeated by their forces in Magisters' Terrace.

His soul was confined to the plane of Revendreth within the Shadowlands for his misdeeds.