This article is using {{Card template}}.
See Help:Style guide/Card for how to edit this kind of article.
Edit this article
Kabal Talonpriest
40432 • CFM_626
Regular 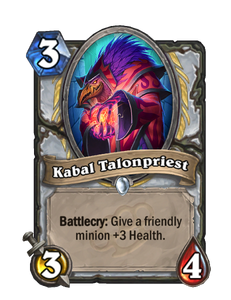 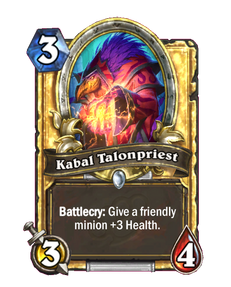 Inkmaster Solia had to figure out how to tattoo feathers. 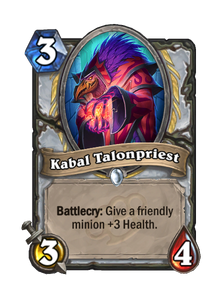 Kabal Talonpriest is a common priest minion card, from the Mean Streets of Gadgetzan set.

This minion's battlecry is exactly the same as Temple Enforcer's, but you can use it two turns earlier.

As a 3/4 minion for 3 mana, this card is strong enough to be played without a target for the Battlecry, as a tempo play.

Summon
You wish to live forever?

Talonpriests are arakkoa followers of Terokk that wield dark powers of the Void. They use elixirs to shift into a realm of shadow. Shadow Dust bears a special connection to the realm of shadows and is a critical reagent in the sacred rites of the talonpriests.

When Terokk was betrayed by his followers and cast into the cursed pools of Sethekk Hollow, the Raven God Anzu saved him and granted him and his followers dark powers. In time, Terokk's followers would become known as talonpriests, and together with their king they would eventually build the refuge city of Skettis to protect the unwanted children of Rukhmar. When Terokk's health began to decline and he started to hate the world, the talonpriests, hoping to rejuvenate their fading king, sealed him away in the shadows.

Believing they have been abandoned by the sun, cursed arakkoa prefer to hide in the forests or beneath awnings during daylight hours. Talonpriests take this a step further and never show their faces to the sun, wearing ritual masks that act as a focus for their communes with Anzu.