This article is using {{Card template}}.
See Help:Style guide/Card for how to edit this kind of article.
Edit this article
Kabal Lackey
40299 • CFM_066
Regular 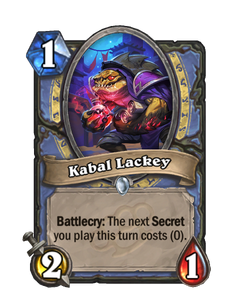 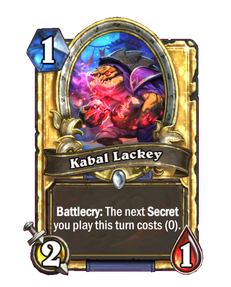 I'll tell you one thing he doesn't lack: GUMPTION. 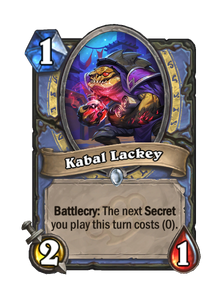 Kabal Lackey is an common mage minion card, from the Mean Streets of Gadgetzan set.

A very powerful addition to Secret Mage decks, offering a whopping 3-Mana discount to a Secret at hand, while having a fairly usable body. It also has strong synergy with other Secret-based cards. It curves into Medivh's Valet and aids in lowering Kabal Crystal Runner's mana cost quickly.

In Wild, it competes with Mad Scientist for utility. While Kabal Lackey is cheaper, has better mana efficiency, and is more controllable in what Secret you want played, Mad Scientist trumps it in card value since the player does not need to draw and play the Secret in the first place.

Summon
I'm with the Kabal!

This seemingly low-ranking member of the Kabal is a goren,[2] a race of small, peculiar creatures native to the planet of Draenor, the homeworld of the orcs and the temporary refuge of the draenei.

The goren are strange creatures found on Draenor that appear to bond with certain elements. Goren are related to the Breakers and eat rocks, ore, and even elementals. They are relentless and voracious and can overwhelm those not prepared.

While the gronn and magnaron shape the world through their brute individual strength, the goren are scavenging opportunists who dart unseen between the lumbering feet of their larger cousins. Roughly the size of an Azerothian trogg, goren live in massive colonies that burrow through the earth, gobbling up minerals and leaving twisting caves in their wake. They enjoy devouring crystalline minerals, which are digested and extruded through their skin, giving some goren the benefit of an armored crystalline shell. The bane of both orc and draenei miners, goren sniff out and infest mineral-rich burrows. Adventurers should be wary of the gorens’ ability to shoot crystalline projectiles and swarm around unprepared explorers in rolling packs, as well as their impossibly sharp teeth and acidic spit.

While the majority of goren are smaller than gnomes, some types grow far larger, towering over even the tauren. Rare individuals have been known to grow to monstrous proportions. This is significantly determined by the dietary success of the individual goren - given sufficient sustenance a goren can grow far beyond the normal size for their species. The largest known goren is Oregorger, whose gluttony has led his frame to swell far beyond the size of any other. It is possible goren simply continue to grow throughout their lives without limit, at least as long as they have enough food to satisfy their ravenous appetites. It should be noted that goren (not unlike virmen) has no love for raw turnips, and are not interested in eating them.

The Lackey is noteworthy, as it is the first known example of a goren located on Azeroth (not counting the two different types of goren companion pets adventurers may have brought back with them from the alternate Draenor). When asked how the Kabal Lackey ended up in Gadgetzan, Ben Brode replied "Probably via gryphon".[2]