This article is using {{Card template}}.
See Help:Style guide/Card for how to edit this kind of article.
Edit this article
Kabal Crystal Runner
40583 • CFM_760
Regular 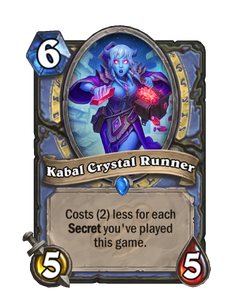 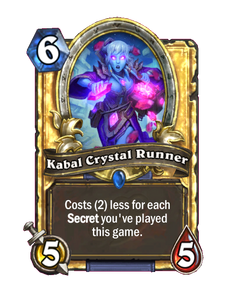 "Listen, I can cut you in on a little of this premium mana, but you can't tell my boss." 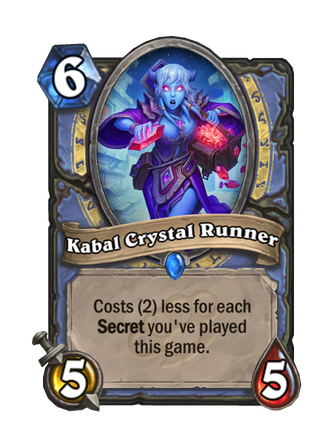 Kabal Crystal Runner is a rare mage minion card, from the Mean Streets of Gadgetzan set.

Kabal Crystal Runner can usually be found in Mage decks running Secrets. Her cost reduction requires only 3 Secrets to be played to be a free drop. Even with only one Secret ever being played, her stats are slightly better than those of

Chillwind Yeti, making her a reasonable play. However, without Secrets she is an expensive and plain mid-size minion, making it wise to wait before playing her.

Effigy, possibly forcing your opponent to trade weaker minions into it and give you another 6-drop.