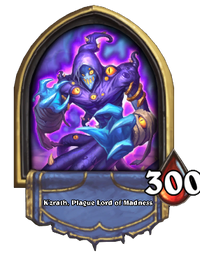 The second plague is in the brain: Among these dunes, Madness reigns.

K'zrath, Plague Lord of Madness is the final boss in Chapter 2 of Tombs of Terror.

For Phase 1, it is important to plan out your plays a turn ahead. A good way to solve the problem of minions rotating is to pick cards during the run that generate 1/1s and other cards that on their own are poor, but has synergy with your deck. Combine this with the Band of Scarabs to make rotated minions significantly weaker and be willing to sacrifice the extra potential damage from the twist rather than betting on a large minion hitting what you need it to based on RNG. Survival is more important for both this and the next phase.

For Phase 2, placement of minions is critical. If you're lucky and the boss summons 1/1s then you can circumvent the loss of minions, while Divine Shield is invaluable to ensure that your minions live long enough to push through to Phase 3.

In Phase 3 you can be much more aggressive; don't worry about minions having their health reduced, because it only affects one minion, so its effectiveness is significantly reduced the more minions that you control. If you were lucky enough to get LOCUUUUSTS!!! treasure, then you can start to hammer the face, remember that it is not exclusively targeted towards minions, meaning that for 6 Mana you get 28 push damage if needs be. Combine this with Rocket Backpacks and you get huge burst damage and a good degree of board control, and as they're only 2/2s it is irrelevant if the health of one is reduced to one. Finley's Pith Helmet is another good counter to the Phase 3 Hero Power, as you can cycle health buffs to further render it irrelevant.

One problem that comes with the boss is the C'Thun hanging over the match, which can easily get to 30/30, making LOCUUUUSTS!!! even more valuable as potentially it reduces the battlecry damage significantly, assuming no trading before the boss plays C'Thun. Another is that you can easily get overwhelmed if the boss casts Psychic Scream when you have no cards in hand, so play conservatively, chipping damage down and controlling the board, while trying to maintain card advantage. Bubble Blower Hero Power is excellent for this, as it gives you one minion per turn for 1 Mana. If you manage to keep the board locked down then over successive turns you can easily build up card advantage.

Glyph of Warding will give you a huge advantage in this fight because K'zrath won't be able to play the strongest cards in his deck (Old Gods) and it also neutralises Doomcaller's ability to shuffle C'Thun into deck.

Overall, this boss required you to think ahead and make smart plays; make value trades when possible, if you can push face safely then do it, but don't be greedy, and make sure your hand has around six or seven cards to give you enough options. With a bit of luck and decent planning it is possible to defeat the boss in one sitting, though it certainly is somewhat RNG dependent.

Reno Jackson
Your madness has no effect on me, because banana phlegm, farthing flymum..
Sir Finley
I shall not succumb to your madness! I do worry about Reno, however.
Elise Starseeker
I feel… confused. This creature is warping our minds!
Brann Bronzebeard
Madness! MADNESS! No, no - stay focused, Brann.

K'zrath, Plague Lord of Madness
Prepare to lose your minds!
Release your will. Succumb to the madness!
Your bravado masks your weakness, human. (vs. Reno Jackson)
Your companions look down on you, beast. (vs. Sir Finley)
Genius is just a gateway to madness, elf. (vs. Elise Starseeker)
Your companions are thieves, dwarf. (vs. Brann Bronzebeard)

I am not your only enemy here.
Deceivers surround you...

Your purpose wanes with each strike!
Traitors fill your ranks.

You must be mad to keep coming back!
Watch as your minions betray you further!
Will you let them stab you in the back again?

The nightmare twists and turns...
Welcome to your new reality.
Nothing is as it seems...
Your mind shatters, piece by piece...

THIS is madness!
Reason means nothing.
A seed of chaos in every heart...
What will break you?

K'zrath, Plague Lord of Madness
Anyone who is not you is an enemy.
Friendship is only an illusion. It is easily shattered.
None have fought beside you without thinking of fighting against you.
I began as anxiety, turned to dread, grew into fright, and matured into madness.
Great minds are undone by the smallest questions.
Jealousy and paranoia are my playthings. Also crossword puzzles.

Sanity is a precious thing to waste...

You will never recover from this!

K'zrath, Plague Lord of Madness
The road to insanity is seldom smooth...
Your worst fears, realized!
You were right to worry...

How quickly they turn...
I see my words are getting through to you...

You can never tell...

No one is safe.

Oh, did you need that?

What you see may shock you...

Ah, cultists... so easy to mold to my purposes!

So you are beginning to understand...

Appearances can be deceiving.

K'zrath, Plague Lord of Madness
What have you done?

K'zrath, Plague Lord of Madness
The cruelest betrayal is the one you bring upon yourself.
Lose your mind--lose it all...
Your "friends" would have done this to you anyway...

K'zrath is unique to Hearthstone. It is one of the five sources of plagues that Rafaam has unleashed into Uldum. K'zrath is the embodiment of the Plague of Madness.