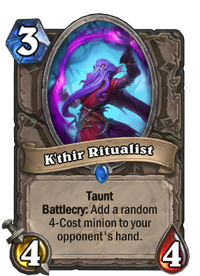 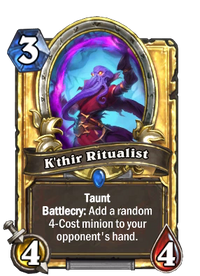 Something evil this way comes? and it's bringing friends over!

K'thir Ritualist is a rare neutral minion card, from the Madness at the Darkmoon Faire set.

The k'thir are a type of faceless one, first encountered on Kul Tiras by the Alliance and Horde. Though smaller than their brethren, they are no less dangerous as they manipulate in the shadows, bending the wills of their enemies and even reality itself. Before the Fourth War, most inhabitants of Kul Tiras thought them mere legend, stories used to warn of the dangers of peering too deep into the waters with tidesage magic, but they now walk among the inhabitants of Stormsong Valley. They look human, as their true appearance only shows upon death or when they want it. Hiding among the populace, they sowed the seeds of their dark masters and took control of the docks at Port Fogtide. They forcefully corrupted humans into k'thir, while other fanatic followers of Lord Stormsong willingly went through rituals to be transformed. The followers found at the inner quarters of the Shrine of the Storm have all become k'thir, with Stormsong himself having become one as well.