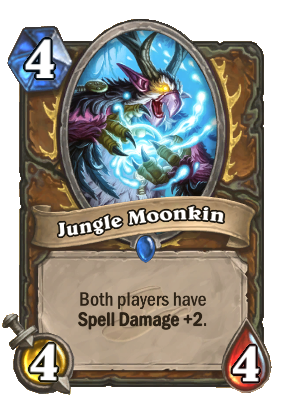 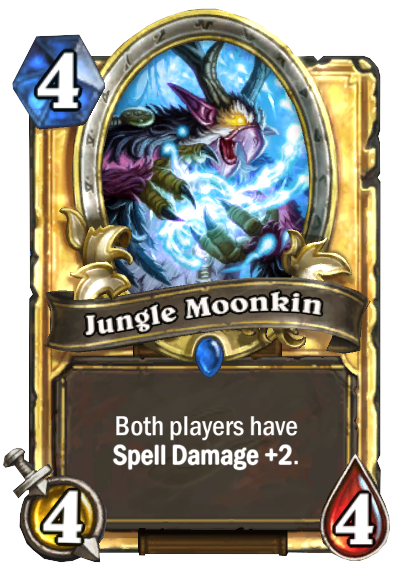 Jungle Moonkin is a rare druid minion card, from the League of Explorers set.

Two copies of regular Jungle Moonkin are obtained by completing The Ruined City, the third wing of The League of Explorers.

As a Wild format card, both regular and golden versions of Jungle Moonkin can also be crafted for the following amounts:

This is an improved yet double-edged Ogre Magi. Very strong with cards like Swipe but can backfire due to your enemy also benefiting from it.

The wildkin are serene, powerful creatures, thought by the night elves to have been created by the moon goddess Elune. They resemble a cross between a bear and a horned owl, which explains both their wisdom and ferocity. They act as a powerful force for good and a staunch ally of the night elves. While good-tempered and wise, the wildkin fights fiercely against evildoers, especially undead and the forces of the Burning Legion.

These feathered creatures go by many names - moonkin, owlbear, and owlkin. These gentle giants possess a natural, druidic energy similar to that of the night elves.

These bird-faced humanoids are considered an abomination by most, but actually find favor with night elves. The wildkin have long been considered a sacred animal by the night elves and the tauren. The priests of Elune see the wildkin as imbued with the spirit and strength of the Moon Goddess, and the druids see them as guardians and protectors of nature.