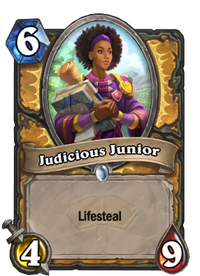 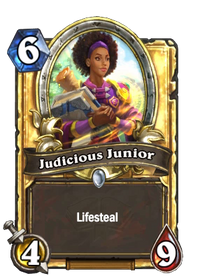 Judicious Junior is a common paladin minion card, from the Scholomance Academy set.

Judicious Junior can be obtained through Scholomance Academy card packs, through crafting, or as an Arena reward.

Judicious Junior is most at home in Control decks, where her high health and Lifesteal would come in handy against Aggro decks. Playing this card is considered very low tempo due to the relatively high mana cost and lack of Taunt. However, if the enemy ignores Judicious Junior and goes face, a well timed Blessing of Kings or Blessing of Authority can lead to a huge amount of healing once this minion attacks. Judicious Junior's high health also ensures that she is far more likely to take multiple trades to take down.