Edit
watch 02:53
GTA: The Criminal Enterprises - The Loop
Do you like this video?
Play Sound
Jomaro Kindred
Regular 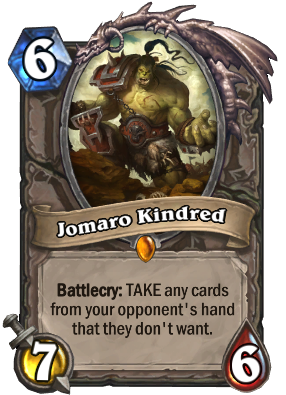 Elite
Battlecry: TAKE any cards from your opponent's hand that they don't want.
External links

Jomaro Kindred is a former Senior Concept Artist on the Team 5 Hearthstone development team,[2] as well as artist for the cards listed here.

Kindred shared 2D art duties with Lead Artist Ben Thompson, and created the chalkboards used in Tavern Brawls.[3][4] Before joining the team, the first Thompson saw of Kindred's art were two card backs shared on his personal site, themed after the Alliance and the Horde.[3]

Kindred joined the team on June 10th, 2014.[5] Prior to joining Team 5, Kindred was Senior Concept Artist with Nerve Software. His previous credits include the 2010 Xbox port of DOOM II, as well as Call of Duty: Black Ops and Aliens: Colonial Marines.[6]

The art for Kindred's credits card was created by and depicts