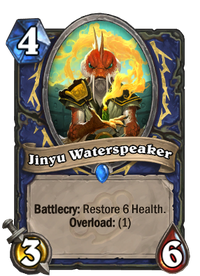 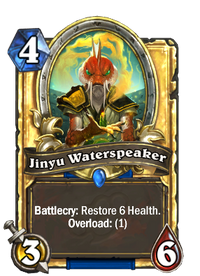 Waterspeakers can tell the future! So the Jade Lotus employs them to speculate on the Auction House.

Jinyu Waterspeaker is a rare shaman minion card, from the Mean Streets of Gadgetzan set.

Jinyu Waterspeaker can be obtained through Mean Streets of Gadgetzan card packs, or through crafting.

Jinyu Waterspeaker is used mainly by control shamans (or sometimes mid-range shamans) to provide additional Healing. Against aggro decks, Jinyu Waterspeaker is generally used to heal your hero, or a big Taunt minion. In a more control-focues matchup, this card would heal important minions instead.

Summon
May your feet never brine.

The jinyu are a race of humanoid fish-like creatures that live in Pandaria. They are an elder and wise race, looked up to even by the pandaren. Masters of the water, they have been known to stick their staffs in rivers and literally hear what the land is saying. The waterspeakers are an upper caste, spiritual leaders that use the river to listen to the future.

Jinyu Waterspeaker is a level 90 jinyu found in the bathhouse of the Tavern in the Mists on the Veiled Stair.