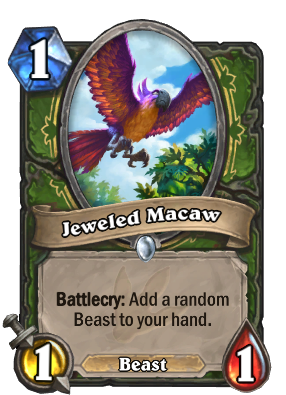 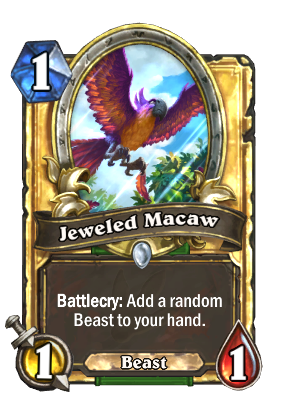 Battlecry: Add a random Beast to your hand.
Flavor text

It’s not LITERALLY jeweled. The goblins were terribly disappointed.

Jeweled Macaw is a common hunter minion card, from the Journey to Un'Goro set.

Jeweled Macaw can be obtained through Journey to Un'Goro card packs, or through crafting.

A powerful 1-drop, providing minor board presence while also replacing itself with another Beast minion for the Hunter.

Jeweled Macaw is effectively a faster Webspinner, although it lacks some potential Deathrattle synergies.

The Macaw will also provide credit towards the Quest The Marsh Queen.

From the journal of Eddie Malone shortly after arriving at the edge of Un'Goro Crater:

We followed the trail down but as we crossed into the forest, a flock of brightly colored parrots burst squawking from the trees overhead. The lady leading the expedition, Professor Starseeker, told us they were named Jeweled Macaws, and that their calls can attract dangerous beasts!

I wonder if I can catch one?!

[...] Macaws are way tougher than they look. We set up camp after the 'bird incident', and Starseeker gave us a speech about how beautiful, wondrous, and full of mysteries Un'Goro Crater is, and then spent a few more minutes talking about how it can kill us all.[1]