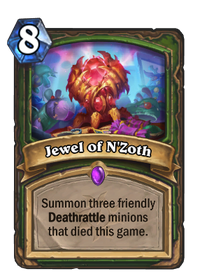 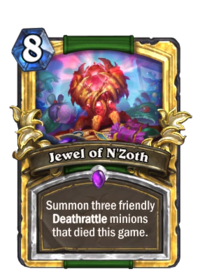 This coveted gem calls for you to free it… and unleash an inescapable prison.

Jewel of N'Zoth is an epic hunter spell card, from the Madness at the Darkmoon Faire set.

Just like N'Zoth, the Corruptor, Jewel of N'Zoth provides a massive lategame board swing for Deathrattle-centric decks, though there are several key differences between these two cards. The Jewel's effect is weaker, but it can be played a full two turns earlier and you can use two copies of it. Furthermore, the fact it's a spell means that it's easier to Discover additional copies and you can use it alongside other cards (such as Maxima Blastenheimer and Flark's Boom-Zooka) that would otherwise risk summoning N'Zoth and losing his Battlecry. Finally, N'Zoth, the Corruptor is a Wild-only card, leaving his Jewel as the only similar option available to Standard players.

There are many powerful high-cost Deathrattle minions to fuel this card in Standard (Scrapyard Colossus, Darkmoon Tonk, and Plagued Protodrake, to name a few), though Hunter's lack of survival tools may make it difficult to live long enough to play these cards. Mid-cost options such as Cairne Bloodhoof, Savannah Highmane, and Smug Senior may prove more practical. Cards that help bring out big Deathrattle minions earlier like Maxima Blastenheimer and Carrion Studies can also be useful. Wild players, meanwhile, have a much wider range of Deathrattle cards to choose from, and Jewel of N'Zoth can slot into just about any deck that already makes use of N'Zoth, the Corruptor. Regardless of format, be wary of running too many weak Deathrattle minions in your deck; the Jewel's limited summons mean that these minions might be resurrected instead of your more powerful ones.

This is one of the four Old God artifacts, a unique theme of Madness at the Darkmoon Faire. This artifact's effect resembles N'Zoth, the Corruptor's.