This article is using {{Card template}}.
See Help:Style guide/Card for how to edit this kind of article.
Edit this article
Jeeves
2062 • GVG_094
Regular 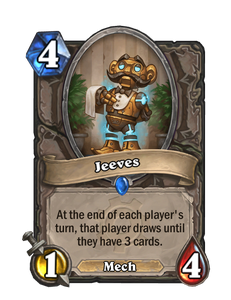 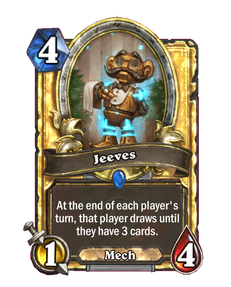 Dimensions: Full • 330 x 410px
At the end of each player's turn, that player draws until they have 3 cards.
Flavor text

This robot is a lean, mean, butlerin' machine. 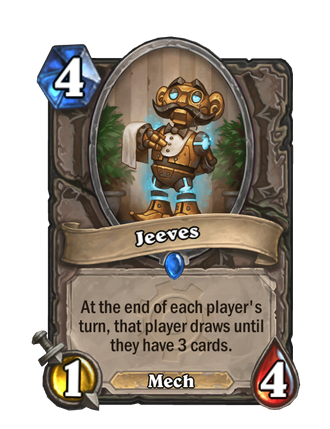 Jeeves is a rare neutral minion card, from the Goblins vs Gnomes set.

Jeeves provides an excellent, if somewhat clunky source of card draw for aggressive Mech decks. Being a Mech itself, Jeeves benefits from various Mech synergies, such as

Metaltooth Leaper. Opponents will sometimes hesitate to remove Jeeves due to wanting to obtain its benefit, but the controlling player usually gains the benefit first, getting closer to victory.

Voracious Reader is the much better alternative to Jeeves, with lower mana cost and the effect only applying to yourself, although Jeeves may still have slight niche use.

Patchwerk in Curse of Naxxramas, as Jeeves will keep attempting to draw cards for him at the end of his turn. This results in Patchwerk dying from fatigue, ensuring a turn four victory.

Jeeves is a repair bot item crafted by engineers in World of Warcraft.

Use: Requests the presence of Jeeves, the perfect gentleman robot butler, who will attend to your needs for 10 min. Jeeves can grant bank access to very skilled engineers and perform mundane tasks such as buying, selling, and repairing for anyone. (1 Hour Cooldown)

Jeeves is based on the character of the same name from P. G. Wodehouse's classic Jeeves stories.

Both the name "Jeeves" and the character of Jeeves have come to be thought of as the quintessential name and nature of a valet or butler, inspiring many similar characters (as well as the name of the Internet search engine Ask Jeeves). A "Jeeves" is now a generic term in references such as the Oxford English Dictionary.