This article is using {{Card template}}.
See Help:Style guide/Card for how to edit this kind of article.
Edit this article
Jan'alai, the Dragonhawk
50088 • TRL_316
Regular 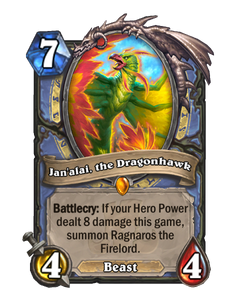 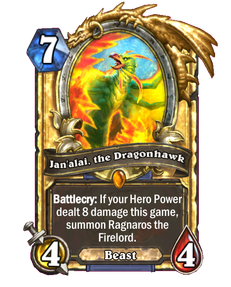 You mess with the Bird, you get the Firelord. 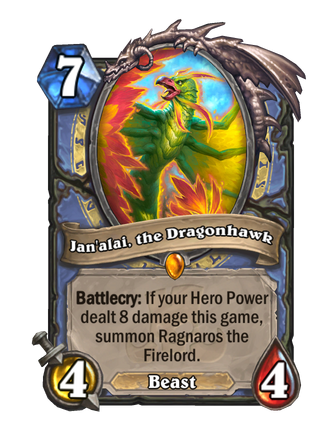 Jan'alai, the Dragonhawk is a legendary mage minion card, from the Rastakhan's Rumble set. 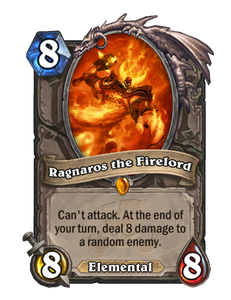 Ragnaros the Firelord, an extremely powerful minion on its own. Having Ragnaros is already a good reward, but it also effectively costs 1 less mana and adds a 4/4 body. However, you will need put your

Fireblast to work for this effect.

To meet the damage threshold as quickly as possible, include as much Hero Power synergy cards as you can.

Daring Fire-Eater gives your Hero Power a burst of damage for just 1 mana, while

Spirit of the Dragonhawk triples your Hero Power damage output. In Wild, another option is to run an odd deck with

Baku the Mooneater for an upgraded Fireblast, which halves the number of times you need to use your Hero Power at most. Wild also has additional options like

Ragnaros himself can do a lot of work without depending on Jan'alai, so consider adding ways to reuse it like

Zola the Gorgon or

Youthful Brewmaster. Since Ragnaros himself is an Elemental,

Frost Lich Jaina will let you heal off of his fireballs.

Jan'alai combos extremely effectively with Khadgar, summoning two copies of Ragnaros for 9 mana, for a whopping 16 damage. Combine with

Khadgar and a 1 mana

Jan'alai is the dragonhawk loa of the Amani trolls.

Hex Lord Malacrass stole her essence, imbuing it into one of the Amani's deadliest rogues. Jan'alai's spirit is chained by

Zul'jin. She is freed when the chieftain troll is killed.

Jan'alai appears with the other Amani gods in Zul'Drak, directing the player to the leopard goddess, Har'koa. The Amani gods are also summoned and tell the player to defeat the guardians at the Altar of Quetz'lun and kill the Prophet of Akali.

Jan'alai appears in Zul'Aman where her spirit is chained by Daakara. He is freed when Daakara is killed.

A Disciple of Jan'alai is present in Tal'aman, the Amani tribe's enclave in Zuldazar.

In Hearthstone lore, Jan'alai serves as the patron loa of Jan'alai's Dragonhawks, the mage team in Rastakhan's Rumble. Her connection to Ragnaros is unique to Hearthstone.